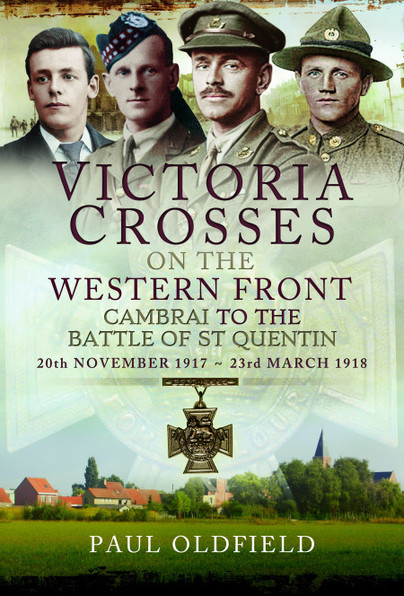 Add to Basket
Add to Wishlist
You'll be £18.00 closer to your next £10.00 credit when you purchase Victoria Crosses on the Western Front – Cambrai to the Battle of St Quentin. What's this?
+£4.50 UK Delivery or free UK delivery if order is over £35
(click here for international delivery rates)

Victoria Crosses on the Western Front - Cambrai to the German Spring Offensive is designed for the battlefield visitor as much as the armchair reader. A thorough account of each VC action is set within the wider strategic and tactical context. Detailed sketch maps show the area today, together with the battle-lines and movements of the combatants. It will allow visitors to stand upon the spot, or very close to, where each VC was won. Photographs of the battle sites richly illustrate the accounts. There is also a comprehensive biography for each recipient, covering every aspect of their lives warts and all: parents and siblings, education, civilian employment, military career, wife and children, death and burial/commemoration. A host of other information, much of it published for the first time, reveals some fascinating characters, with numerous links to many famous people and events.

One of the great strengths of Paul Oldfield‘s series of books on Victoria Cross heroes of WW1 is to draw you down to the level of a single combatant... Readers may be so immersed in the achievements of any particular hero that they feel obliged to go and visit the scene of their action. If so, the book even provides enough useful information to make that a feasible option.

"This book will be an invaluable tool for the battlefield visitor and enable those with a passion for the Victoria Cross, a particular regiment, or indeed the battles specifically covered in this volume, to really understand the moment in the battle that produced a Victoria Cross action."

Each individual tale is given special attention in its own way, thus ensuring that each man’s bravery will never be forgotten. This is the result of painstaking work, the euphoria, having visited the Western Front many times in the midst of an Army careers, research stories of the Victoria Cross. Each volume is very unique... Like all his work, the interspersed photographs in this book are first class. They show photographs of the land horizon with each section labelled in both modern and 1917 contexts to enable anyone visiting these sites to get a feel for the action that took place.

It would definitely come in useful when planning a trip to visit the sites and graves/memorials associated with VC actions from the campaign, and it is unlikely you will ever need any other book on Third Ypres VCs – should you have room on your bookcase!

Like its companion volumes, this is a most commendable effort and therefore highly recommended.

Interview article: 'Unremarkable' Ernest whose great courage and initiative won him a most unexpected VC as featured by

Article: 'First World War heroes have their legacies shared in a popular book' as featured by

Article: 'First World War veterans have their legacies shared in a new book' as featured by