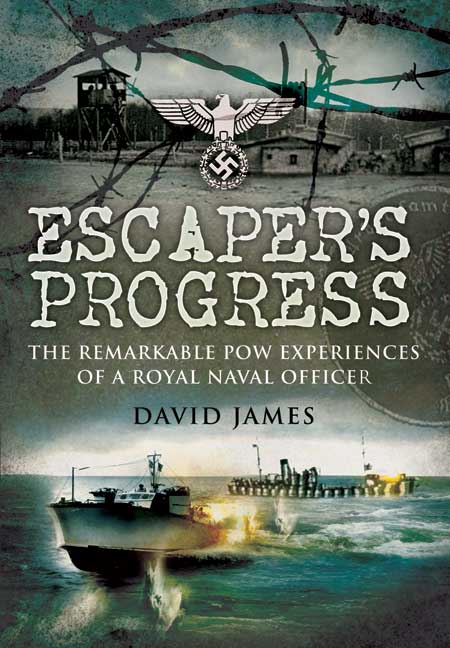 The Remarkable POW Experiences of a Royal Naval Officer

Click here for help on how to download our eBooks
Add to Basket
Add to Wishlist
You'll be £4.99 closer to your next £10.00 credit when you purchase Escaper's Progress. What's this?
Need a currency converter? Check XE.com for live rates

David James was in Motor Gunboats (with Robert Hichens of Gunboat Command.) Captured in February 1943 after abandoning ship as a result of a fierce engagement with three German armed trawlers in the North Sea he was imprisoned in Dulag Marlag.

His first tunnel was discovered before completion. In December 1943 he succeeded in escaping during the weekly bath house visit and was on the run for almost a week disguised as an officer of the Royal Bulgarian Navy. He was captured after several close calls while attempting to board a ship at Lubeck.

In February 1944 he escaped again this time dressed as a Swedish sailor and travelled by train to Bremen, Hamburg, Lubeck, Rostock finishing up in Danzig, all the while searching for a suitable ship. He eventually succeeded in reaching Stockholm after 2½ days in the extreme heat of a ship's engine room. His superbly written narrative is full of suspense and excitement.