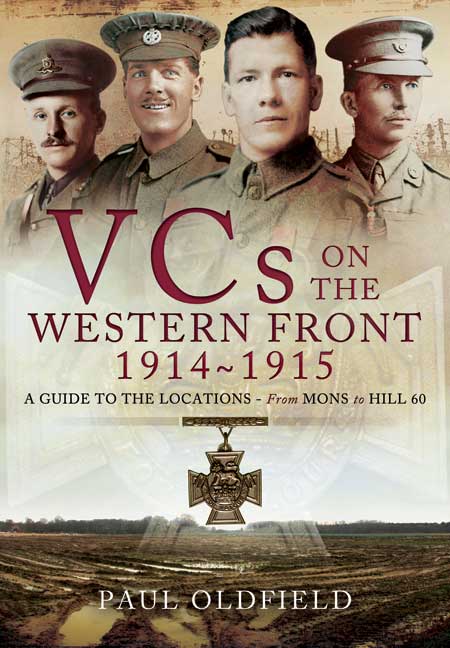 Add to Basket
Add to Wishlist
You'll be £25.00 closer to your next £10.00 credit when you purchase Victoria Crosses on the Western Front August 1914 - April 1915. What's this?
+£4.50 UK Delivery or free UK delivery if order is over £40
(click here for international delivery rates)

The research for this book commenced in 1988 while the author was serving in the Army. In the years since, numerous sources have been consulted, but career imperatives left insufficient time to complete the project until retirement from the military. In the past the author spent many days on the First and Second World War battlefields wondering precisely where the Victoria Cross actions took place. He resolved to find out.

The book is designed for the armchair reader as much as the battlefield visitor. A detailed account of each VC action sets it in the wider strategic and tactical context. Detailed sketch maps show the area today, together with the battle-lines and movements of the combatants. It will allow visitors to stand upon the spot, or very close, where the VCs were won. Photographs of the battle sites illustrate the accounts. There is also a comprehensive biography for each VC recipient and photographs. The biographies cover every aspect of their lives 'warts and all' - parents and siblings, education, civilian employment, military career, wife and children, death and burial or commemoration. There is also a host of other information, much published for the first time. Some fascinating characters emerge, with numerous links to many famous people and events.

As featured on BBC Radio Wiltshire and in the Daily Record, Gloucestershire Echo, Canterbury Times and Barking & Dagenham Post.

This series from Paul Oldfield concentrating on the Victoria Crosses awarded on the Western Front, provides a pivotal record of the Great War for future generations. Whilst so many of these stories may be known to the well read on the Great War, or to the communities, Regimental historians, or those connected circles to these special men, having the stories combined in these volumes enables future generations to have a permanent record of all of them...

Each story included is carefully broken down, and sectioned off between different battle's thus providing an easy point of reference if you are just looking for a particular aspect of the campaigns from autumn 1914 to spring 1915...

The book contains a comprehensive index with name, Battalions and locations, all enabling the reader to check for instant detail on a particular story, location or battle which they wish to find, as well as sources used. As useful is a section entitled 'Useful Information' containing helpful reference to elements of the Battlefields such as driving, health information and wider detail.

There are numerous photographs and maps, a section of useful information for visitors to the battlefields and a comprehensive index.

Each affair, each attack, each battle is comprehensively described while detailed maps show where each Victoria Cross action took place.

Both publisher and author are to be commended for a fine book that is presented well and supported by a wealth of photographs, sketches and maps.

It is obvious when flicking past the beautifully designed dust cover and through the glossy pages that this is more than just a thoroughly well-researched body of work, it is a work of passion.

As seen in The Whitehaven News.

As seen in the Salisbury Journal.

As seen in the Hemel Gazette.

As seen in the Norwich Evening News.

As seen in the Eastern Daily Press.

This is a great book and a timely publication that gives the reader not just one bite at the cherry, but several. A few years back there was a series of VC books published and I have most of these on my bookshelves. This volume - which I hope will be the first of many - is organised in a very sensible fashion; first setting the scene where the VCs were won and then, later, re-visiting those actions and focusing on the men whose deeds earned them Britain's highest military award for valour.

The vast majority of the men named here were career soldiers, members of the original BEF; the contemptible little army which faced the might of Von Kluck's army and somehow managed to fire off fifteen rounds a minute, a rate of fire so rapid that the opposing German Army thought they were facing machine gunners. In the case of Dease and Godfrey at Mons on the opening day of fighting on 23rd August 1914, they were of course. Their deeds are well relayed here as are the actions of all the subjects of this thoroughly researched book.

This is a book that can be read at home or packed into a travel bag and carted away on a tour of the battlefields. Helpful maps show the reader where each VC action took place and there are some photos of the men in here which I had never seen before. I was familiar with the photo of Sidney Godley in his PoW uniform, and with the photo of him taken some while later, proudly wearing his medals. But I'd not seen him in the group photograph on a battlefield pilgrimage in 1939.

As well as being thoroughly researched, the book is very readable; never getting bogged down with too much regimental scene-setting and yet giving enough information to make it very clear to the reader exactly what was going on. The affair at Nery on 1st September 1914 when L Battery RHA won three VCs is a striking example of how to make military history accessible and I wish the book well. For my money, it's well worth the cover price, and a bargain at anything less than that. I look forward to the appearance of future volumes.