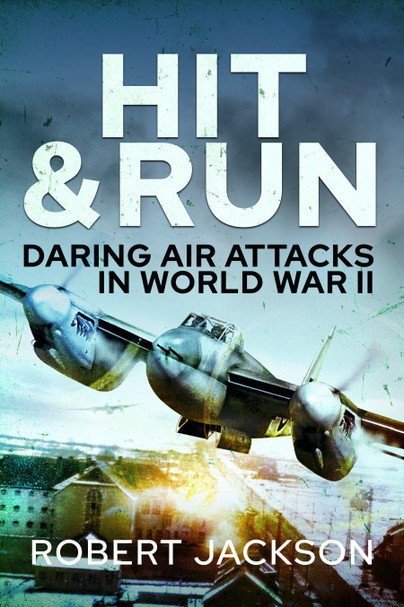 Add to Basket
Add to Wishlist
You'll be £11.99 closer to your next £10.00 credit when you purchase Hit & Run. What's this?
+£4.50 UK Delivery or free UK delivery if order is over £35
(click here for international delivery rates)

The book describes some of the most daring air attacks of World War II. Some were outstanding successes and some were unmitigated disasters.

North Sea Battle: In the early weeks of World War II, Britain and Germany were determined to attack one another's warships in their respective naval bases. Both RAF and Luftwaffe learned the folly of sending unescorted bombers into enemy territory.

Flames over France: In May 1940, the RAF and French Air Force launched a series of desperate hit-and-run attacks on the German armoured columns advancing into France and Belgium. The cost was appalling.

Precision Attack: In August 1940, a newly-formed Luftwaffe unit called Erprobungsgruppe 210 (Test Group 210), equipped with bomb-carrying Messerschmitts, was assigned a mission to wipe out British radar stations in a series of lightning low-level attacks.

Carrier Strike: In November 1940, a force of Fairey Swordfish torpedo-bombers crippled the Italian fleet in a daring night attack on the naval base at Taranto.

By Daylight to Germany: In the summer of 1941, Blenheim squadrons of No 2 Group RAF launched a series of daring low-level attacks on power stations and naval facilities in northern Germany. The principal target was Bremen, at the extreme limit of the bombers' range.