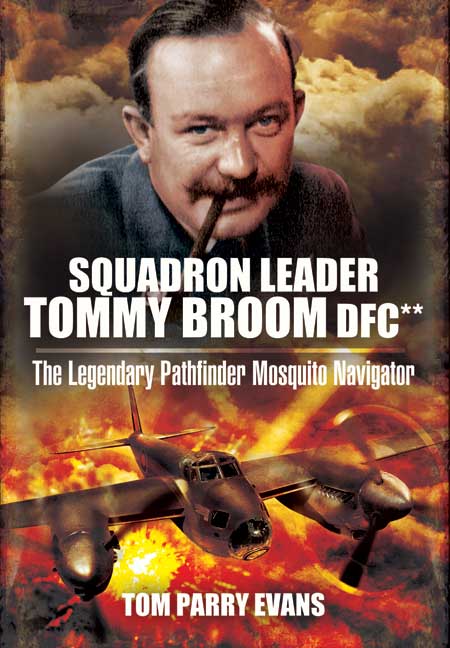 Add to Basket
Add to Wishlist
You'll be £12.99 closer to your next £10.00 credit when you purchase Squadron Leader Tommy Broom DFC**. What's this?
+£4.50 UK Delivery or free UK delivery if order is over £35
(click here for international delivery rates)

Order within the next 11 hours, 57 minutes to get your order processed the next working day!

Tommy Broom was one of the RAF’s most legendary and popular heroes of World War II. He joined the service at eighteen years of age in 1932 and after service in the Middle East, he first saw action against Germany in a Fairey Battle during 1939 with No 105(B) Squadron. He continued to serve with 105 Squadron until November 1940, a period that included the disastrous Battle of France and the low-level attacks on the Channel ports to destroy the invasion barges, in both of which actions the squadron suffered severe losses.
Having completed more than his share of front-line flying he was transferred to 13 Operational Training Unit at Bicester, to teach the influx of newly-trained navigators the additional skills required for combat situations. He returned to 105(B) Squadron in January 1942 to complete a further tour. In August of the same year he was again posted to the educational role, this time at 1655 Mosquito Training Unit where he stayed until May 1944. He then returned to front-line flying until the end of the war, belonging to numbers 571(B), 128(B) and 163(B) Mosquito Squadrons. Tommy completed 83 operations during the war and teamed up with a namesake as his pilot, Ivor Broom – they became known as the ‘Flying Brooms’ and completed 57 operations together.
The citation for one of his Distinguished Flying Crosses reads: ‘Flight Lieutenant Broom DFC was a navigator in a Mosquito aircraft of 128 Squadron detailed to place a 4000 lb bomb up to the mouth of a railway tunnel in the region of Kaiserslautern on the morning of the 1st of January 1945. This operation required great skill, determination and the utmost precision. By his
assistance to his pilot this attack was carried out most successfully. Flight Lieutenant Broom has completed 73 operations against German targets, the majority of which were heavily defended and including 15 against Berlin. He has, at all times, shown consistent keenness and skill.’
During 1942 his aircraft crashed into an electricity pylon near Antwerp at over 250mph. Both he and his pilot miraculously escaped back to the UK. This book is full of exciting flying and dangerous escapes, but the good nature and quite confidence of this brilliant navigator has drawn praise from the pilots he flew with and those he trained.
Tom Evans lives in the small West-country town of Portishead near Bristol and is a firm friend of Tommy Broom. This book was first published in 1999 as ‘A Posset Lad’ and was printed privately for a mostly local readership.

Tom Evans lives in the small West-country town of Portishead near Bristol and is a firm friend of Tommy Broom. The two Toms still meet weekly for a pint or two at the Posset local.