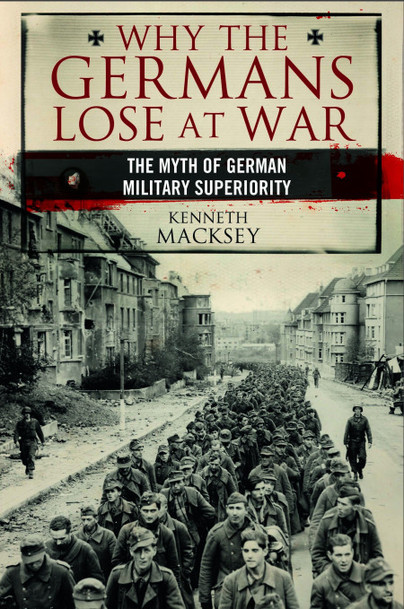 Why the Germans Lose at War (Paperback)

The Myth of German Military Superiority

Add to Basket
Add to Wishlist
You'll be £8.99 closer to your next £10.00 credit when you purchase Why the Germans Lose at War. What's this?
+£4.50 UK Delivery or free UK delivery if order is over £35
(click here for international delivery rates)

‘This book is a brilliant account of German military history which makes for thought-provoking reading.’ – Military Modelcraft International

The German armed forces suffered crushing defeat in the last century. Kenneth Macksey examines the reasons behind these catastrophic military failures. Were they the random fortunes of war, or the inevitable result of a particular structure, leadership and history?

A nation with few natural defensive boundaries, Germany traditionally had to struggle to survive, and developed an aggressive and militant outlook. Its great strengths were the brilliance of individual generals and military thinkers, the innovative development of the military forces, and the skill and tenacity of the fighting men.

Set against all this was a short-term war policy, a tendency to underestimate the enemy and believe its own propaganda, and the politicisation of the military staffs. These and many other factors were to lead Germany from nineteenth-century success, and dreams of world domination, to twentieth-century defeat.

A compelling read, well laid out and argued.