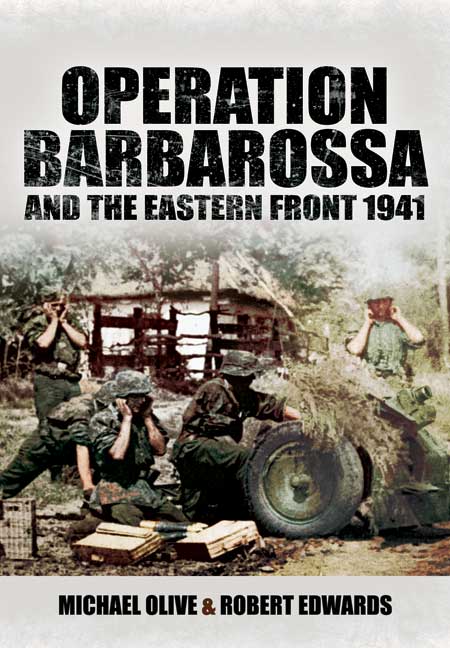 Add to Basket
Add to Wishlist
You'll be £19.99 closer to your next £10.00 credit when you purchase Operation Barbarossa and the Eastern Front 1941. What's this?
+£4.50 UK Delivery or free UK delivery if order is over £35
(click here for international delivery rates)

Operation Barbarossa and the Easternt Front 1941 is a highly illustrated record of the German Invasion of the Soviet Union, which began on 22 June 1941. Across a stretch of land over 1,800 miles long, over 4.5 million troops from the Axis powers marched to deliver what they thought would be a resounding blow to Soviet power in what was and still is the largest invasion in the history of warfare. After enjoying success after success and securing the capture of over 3 million Soviet troops, many of whom died in Nazi work camps, the German-led assault was eventually curtailed and repulsed by a mixture of Russian determination, abhorrent winter conditions and over extended lines of communication.

Using an extensive collection of rare and previously unpublished photographs together with detailed captions and accompanying text, Operation Barbarossa and the Easternt Front 1941 provides a unique insight into the troops, tanks, weapons, uniforms and battlegrounds used during this bitter and costly campaign. It is an ideal reference for Second World War enthusiasts, scholars and modelers alike.

As someone who can’t get enough information about the conflict on the Eastern Front, I was quite interested in getting hold of a copy of this book to see if it could offer any fresh perspectives.

As it says in the title, the book looks at the Barbarossa campaign of 1941 which saw the German Army at it’s peak and the opposing Russians struggling to gain traction until that years unusually harsh winter blunted the German advance toward Moscow. The introduction offers the reader a concise background to the campaign and then it launches into the photos.

The book is broken down into sections covering such subjects as the German & Soviet soldier, their motorised vehicles, artillery and so on. There is a good mix of both professionally shot propaganda photographs and also more candid shots taken by individuals who took a camera with them on their big adventure across Russia and it is these photo of friends, their locations and the sights they saw which I found most fascinating.

The book also contains ‘the colour of war’ - a section showing a selection of the uniform and kit items of both sides in colour which would be a useful reference to modellers.

A great reference book featuring many pictures that I’ve not seen before and definitely worth a read to anyone with an interest in this fascinating subject.

A superb collection of photographs, many published for the first time.

Operation Barbarossa brings together a truly wonderful collection of images from the first months of madness of Hitler’s bonkers Barbarossa. The photographs are all entirely new to me, and the pleasure of browsing the pages is something you can enjoy again and again.

There is absolutely nothing to criticise about this book from first to last and I would imagine it would offer inspiration to re-enactors and model makers alike. The captions are excellent.

The quality of reproduction is first class and the range of subject matter, broken down into infantry, armour, vehicles, artillery and so on, is so good that it could go on forever. Unfortunately, it doesn’t. My favourite chapter is the one for Soviet armour, inevitably showing abandoned or destroyed vehicles. The lumbering KV2s are my favourites, a link to Tamiya kits of a bygone youth. It brings on smiles and memories of a silly afternoon shooting a lot of knackered tank models up with a BB gun when it was time to put away “childish things” – as the rhyme goes. I digress…again.

Whatever way you sent your childhood models to Valhalla, this book will keep your grown up interest in military history in full focus. It is the best photographic book I’ve had for review since I got the gig with WHO.