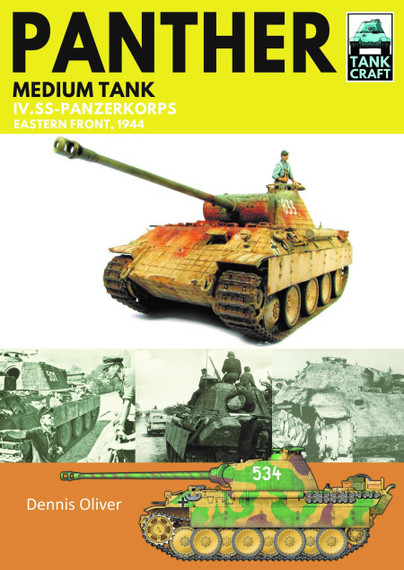 Click here for help on how to download our eBooks
Add to Basket
Add to Wishlist
You'll be £4.99 closer to your next £10.00 credit when you purchase Tank Craft 32: Panther Medium Tank. What's this?
Need a currency converter? Check XE.com for live rates

"For the ultra-realistic modelers, the historical text specifies when production changes altered the design."

The Panther tank has been described in many books as one of the most successful tanks of the Second World War. The latest volume in the Tank Craft series by Dennis Oliver looks specifically at two SS Panther battalions in the IV.SS-Panzerkorps on the Eastern Front in 1944. It’s a fantastic combination of historical research and an examination of Panther model kits currently on the market. It is superbly illustrated with dozens of photographs, tables, maps, and most notably ten pages of side profile artworks depicting 20 different Panther tanks.
The IV.SS-Panzerkorps was created in August 1943 and comprised two SS divisions, namely 3. SS-Panzerdivison Totenkopf and 5. SS-Panzerdivison Wiking. Both divisions each had a panzer regiment that included one battalion of Panther tanks that were issued in early 1944. IV.SS-Panzerkorps was rushed to the Eastern Front to quell the Warsaw Uprising in August 1944. It later also participated in the failed relief of Budapest. But for the most part it spent most of the last year of the war fighting in Poland, Hungary, and lastly Austria where it tried to surrender to US forces but in most cases they were returned to Soviet custody. This book charts the introduction and employment of the Panther tanks within this panzerkorps in the desperate battles to hold off overwhelming numbers of Soviet tanks and infantry. Regardless of the fact that these units were Waffen SS and supporting an evil regime, the Panthers fought with tenacity in terrible weather and suffered from logistical difficulties. Dennis Oliver packs a lot of information into this compact volume and the rather large section on applicable model kits complete with photos of assembled models and reviews of specific kits will certainly appeal to serious model builders.
The superb combination of a unit specific history and model reviews for the Panther enthusiast certainly adds to the reader base for this book. The extremely detailed colour profiles of various specific Panther tanks is the standout item for this reviewer. If you are interested in the Panther tank or are a tank model builder then this book is for you.

"There is a nice balance of modeling information, historical and technical facts to make for quick and enjoyable reading. This soft cover publication will offer a nice reference source for the armor modeler's library."