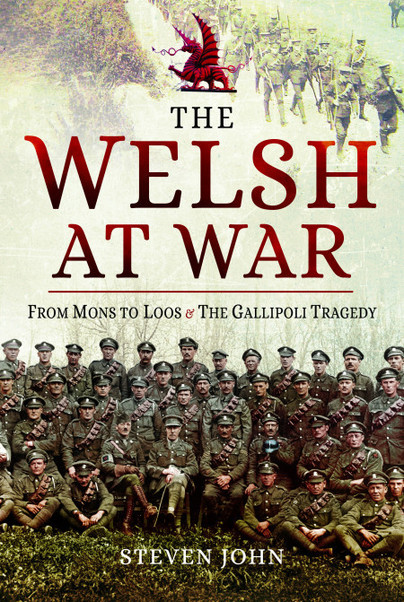 The Welsh at War (Hardback)

From Mons to Loos and the Gallipoli Tragedy

Add to Basket
Add to Wishlist
You'll be £25.00 closer to your next £10.00 credit when you purchase The Welsh at War. What's this?
+£4.50 UK Delivery or free UK delivery if order is over £35
(click here for international delivery rates)

Welsh at War – From Mons to Loos and the Gallipoli Tragedy is the culmination of twelve years of painstaking research by the author into the the Welsh men and infantry units who fought in the Great War.

Welsh troops fought with great courage in every theatre of the war the Western Front, Aden, China, Gallipoli, Egypt, India, Italy, Salonika and in Palestine and as well as the casualties who were suffered during these campaigns, many men gained recognition for acts of gallantry.

The book covers all of the major actions and incidents in which each of the Welsh infantry regiments took part from the opening of the war in 1914 until the end of 1915, as well as stories of Welsh airmen, Welshmen shot at dawn, Welsh rugby players who fell, Welsh gallantry winners and the Welshmen who died in non-Welsh units, such as the Dominion forces and other units of the British Armed Forces.

While chronicling a history of the war through the events and battles that Welshmen took part in, the stories of individual casualties are included throughout, together with many compelling photographs of the men and their last resting places.

You certainly get a sense of atmosphere in what is effectively a eulogy to the grit and determination of some fine Welsh regiments.

Throughout the book there are some fantastic maps and pictures, which help to bring this book to life and are an important addition. With some excellent commentary on the various battles throughout the book, helps to show the depth of knowledge and research that has gone in to this excellent book.

This is an excellent book for all those interested in the history of the First World War.

Article: 'Loving chronicle of Welsh war heroes' by Toby Neal as featured by