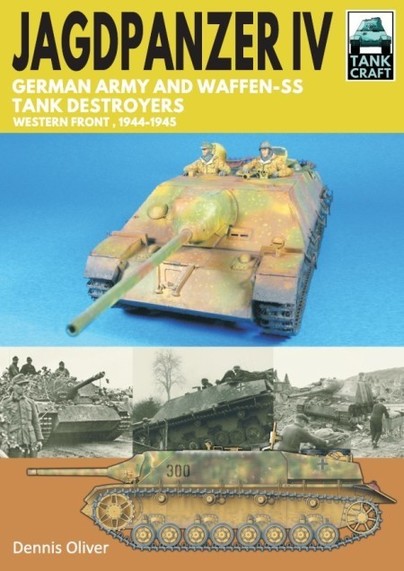 Add to Basket
Add to Wishlist
You'll be £16.99 closer to your next £10.00 credit when you purchase Tank Craft 26: Jagdpanzer IV: German Army and Waffen-SS Tank Destroyers. What's this?
+£4.50 UK Delivery or free UK delivery if order is over £35
(click here for international delivery rates)

Combining the destructive firepower of the 75mm gun with the mobility of the Pzkpfw IV medium tank , the Jagdpanzer IV was quite possibly the most effective tank destroyer of the Second World War. From early 1944 these vehicles were allocated to the anti-tank battalions of Panzer and Panzergrenadier divisions and saw action in Normandy, the Ardennes and the final battles in Germany . In his latest book in the TankCraft series, Dennis Oliver uses contemporary photographs and meticulously researched, superbly presented colour and monochrome illustrations to tell the story of these self-propelled anti-tank guns and the units which operated them in the German defence of the Western Front. As with all the books in the TankCraft series, a large part of this work showcases available model kits and aftermarket products, complemented by a gallery of expertly constructed and painted models. Technical details as well as modifications introduced during production and in the field are also explained giving the modeller all the information and knowledge required.

5/5 stars: Another very informative volume from Dennis Oliver in the Tank Craft series. This book will prove inspirational for model makers and of great interest to military historians and Wargamers. Highly recommended to all.

The quality of the print and pictures are outstanding throughout the book...Highly recommended for beginner to advanced builders.

The 56 black and white photos and one black and white map put the tank destroyer in historical perspective for the dioaramist. For the modeler and miniature painter, 20 color profiles and two color illustrations of the various versions show camouflage patterns.

This is one neat book on the Panther tank. It will be of great interest to modelers planning on building a model of a Jagdpanzer IV...

This offering from Pen and Sword as part of their Tank Craft book series and this time looking at the Jagdpanzer IV is another great addition to the series. Looking over this title it is hard to pick fault.

All in all another fine addition to the series and Dennis makes a very fine job of it once again.

In conclusion I did not know neither the operational history of the various Jagdpanzer IV nor the differences and the various versions, so for me it was a discovery. In the same way I admired Oliver's usual great professionalism in illustrating the history of this vehicle, halfway between the now obsolete Sturmgeschutz and the more powerful JagdPanther. All that remains is to buy this volume and try to build your own Jagdpanzer IV tank hunter!

I also love that this book features a smaller scale model in the showcase section. And not only is it smaller - it's a Matchbox 1/76 kit - but it's also simply built 'out of the box'. None of your intimidatingly good/unaffordably expensive 1/35 trickery or wizardry, with after-market parts, conversions, and whatnot. Anyway, a great book. Love it. Highly recommended.