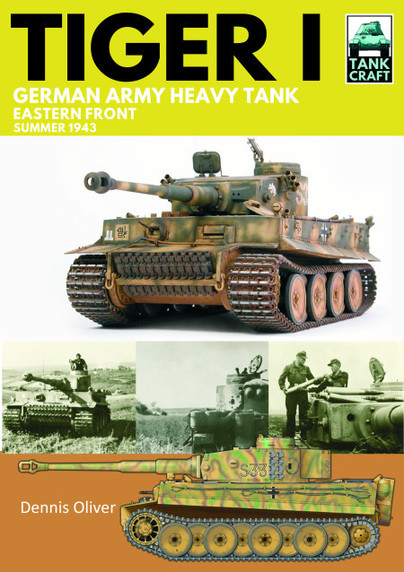 Add to Basket
Add to Wishlist
You'll be £16.99 closer to your next £10.00 credit when you purchase Tank Craft 20: Tiger I: German Army Heavy Tank. What's this?
+£4.50 UK Delivery or free UK delivery if order is over £35
(click here for international delivery rates)

I’m sure every reader of this journal will have heard of the Tiger Tank, one of the most famous and iconic Armoured Fighting Vehicles ever to be produced. Pen and Sword’s Tank Craft series recognises its popularity and this volume is one of five books in this series covering the Tiger. Tank Craft 20 focuses on the Tiger’s use in the heavy fighting on the Eastern Front in the Summer of 1943.
Dennis Oliver is the author of all five books and he uses a similar format in each. A soft cover encloses 64 A4 sized packed pages for the modeller. This book is divided into nine specific sections. After a single-page introduction to the vehicle, there is a six-page bullet point description of the operations during this fateful Summer on the Eastern Front. Two useful, easy to follow maps are part of this section.
Some 20 pages are used to describe the use of the Tiger I during this time by Schwere Panzer-Abteilung 502, 203 and 505, Panzer Regiment Gross Deutschland and SS Panzer Regiments 1, 2 and 3. I especially appreciated the diagrammatic Order of Battle for each unit showing how thinly spread at times the Tiger was between some of these units, leavened and supported by – you’ll have to read the book to find out!
Breaking up the operational descriptive we have 20 full-colour side view drawings, each well captioned, some supported by contemporary photographs of the specific vehicle. These are followed by some model builds, one of the AFV Club 1/48 kit and three of the Dragon 1/35, 1/48 and 1/72. We then reach the Technical and Modification section, necessarily brief, covering just three pages.
Well-illustrated throughout with around 200 contemporary black and white photographs, the book inspires this modeller to reach into the stash and start building. Well recommended.