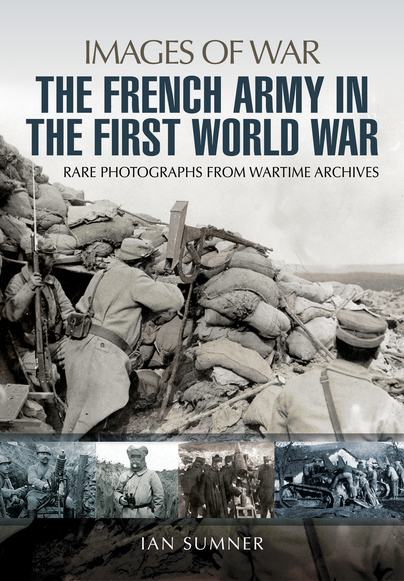 The French Army in the First World War (Paperback)

Add to Basket
Add to Wishlist
You'll be £14.99 closer to your next £10.00 credit when you purchase The French Army in the First World War. What's this?
+£4.50 UK Delivery or free UK delivery if order is over £35
(click here for international delivery rates)

The French army of the First World War withstood the main force of the German onslaught on the Western Front, but often it is neglected in English histories of the conflict. Now, though, keen interest in the war in general and in the part the French played in it has prompted a fresh appreciation of their army and the men who served in it.
Ian Sumner’s wide-ranging photographic history is an important contribution in this growing field. Using a selection of over 150 rare wartime photographs, he provides a graphic overview of every aspect of a French soldier’s service during the struggle.
But while the photographs create a fascinating all-round portrait of the French poilu at war, they also give an insight into the army as a whole, and offer a rare French perspective on the Great War.

This one stop, yet detailed and contextualised pictorial book provides a comprehensive overview of the experience of the French Army in the First World War.

Including poignant, rare and often hard hitting photographs, the text provides linked reference around different experience of the French Army during the Great War. It intertwines various themes including the build up to war, finding the appropriate tactics, the experience of soldiers on the front and reserve lines, to the experience of the Armistice. Importantly it gives the reader an insight to the French perspective.

All of this continually supplemented by striking images. These include young men in a train reminding us that before putting on the uniforms, all young men of Europe looked alike. p19 Another, image shows a tank, the front of which has been battered with bullets reminding us of the brutal nature of technology on warfare at this time. p53 Other striking images show the more simple routine of war, such as men sleeping p57, washing clothes p105 as well as a Wine tanker! p107

By the end of it all, Summer states that 'by November 1918, the victorious French army was one of the largest in the world, with almost 5 million men in uniform compared to 3.6 million in 1914. But army and nation alike were exhausted'.

This book is a wonderful option for picking up, reading, browsing; putting down, then picking up again; not least for anyone who has a busy life, but who is yet fascinated by the subject of military history and the Great War. The photographs are gripping and draw you fully in to the experience of the French army on the western front.

This new addition to the Images of War series is another one on the topic of WW1, and covering in this case the French Army from the start of the war to the end. With so much interest in WW1 generated by the 100 year anniversaries since 2014, this is another interesting, and well illustrated insight into the life of the French army and its' soldiers during the course of the war. Including over 150 photos, most of which I have never seen before, there are some excellent references for modellers on both uniforms and equipment, as well as some interesting dioramas. Even for the non-modeller, this look at what life was like for the French soldier during WW1, including their life both in the front and behind it, but also their training and the medical support they could expect as well.

The losses inflicted on the French nation had a huge impact, and of course went on to influences them years later when faced with the threat of WW2 as well. The conditions they had to fight in were often awful, and the photos give a good idea of what life was like for them, as while a visit to the battlefields today is still a fascinating experience, the beautiful countryside and villages you find today is greatly different from the desolation inflicted on huge swathes of the French countryside during WW1. As is pointed out in the introduction, with 8 1/2 million men mobilised during the war, there were 1 1/2 million killed and another 3 million wounded. That is equal to 890 killed each day of the war, quite staggering statistics. Numbers that today are hard to imagine.

Split into 6 chapters, it covers 'The Attack Must be pursued to close quarters', when at the outbreak of war the French Army was based on conscription rather than volunteers. Each 20 year old man liable for three years military service. Second comes 'Finding the Right Formula', as the experience of the first year of the war and establishment of trench warfare. Among the photos in this section are some of the early French tanks as well. In three we have 'Warriors Ready for anything', which cover life in the front line. Chapter four is 'We know nothing of glory', and this focuses more on the lessons faced by new recruits as they entered service during the war, and the training they received. In chapter five it covers 'Life goes on', the regular periods out of the line, and how they got leave, the chance to get clean and the support of medical services behind the lines. Among the photos here to catch my eye, huge vats of wine on railway wagons that were part of the rations. It is rounded off by chapter 6, 'An unforgettable day', when the war ended in November 1918. Parades, going home and demobilisation are the theme of this one. Each of the chapters has a few pages of introductory text to give some background, and then the photos in each section are accompanied with informative captions.

Another interesting addition to the popular Images of War series.