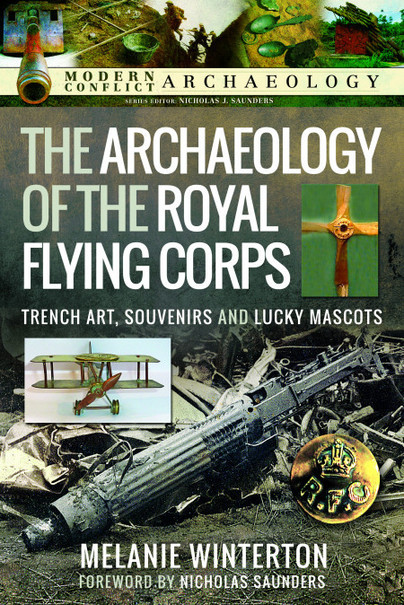 The Archaeology of the Royal Flying Corps (Hardback)

Preorder
Add to Wishlist
You'll be £20.00 closer to your next £10.00 credit when you purchase The Archaeology of the Royal Flying Corps. What's this?
+£4.50 UK Delivery or free UK delivery if order is over £35
(click here for international delivery rates)

Archaeology provides a fascinating insight into the lives of the aviators of the First World War. Their descriptions of the sensation of flying in the open cockpits of the primitive warplanes of the day, and the artefacts that have survived from these first years of aerial combat, give us a powerful sense of what their wartime service was like and chart the beginning of our modern understanding of aviation. But the subject hasn’t been explored in any depth before, which is why Melanie Winterton’s pioneering book is so timely. Hers is the first study of the trench art, souvenirs and lucky mascots associated with the Royal Flying Corps which, in an original way, tell us so much about the experience of flying on the Western Front a century ago.

Extensive quotations from the memoirs of these early airmen are combined with an analysis of the artefacts themselves. They convey something of the fear and anxiety the airmen had to grapple with on a daily basis and bring out the full significance of the poignant souvenirs they left behind. Pieces of crashed aeroplane – wooden propellers, strips of linen, fragments of metal – were recycled and circulated during the war and afterwards became the focus of attention in the domestic home. As Melanie Winterton demonstrates, these items connected the living with the deceased, which is why they are so strongly evocative even today.

Melanie Winterton obtained a PhD in Modern Conflict Archaeology at the University of Bristol. A life-long aviation enthusiast, now semi-retired, following a career in publishing, Melanie continues her research as an independent scholar. This is her first book, though she has written chapters for books and presented papers at various conferences.