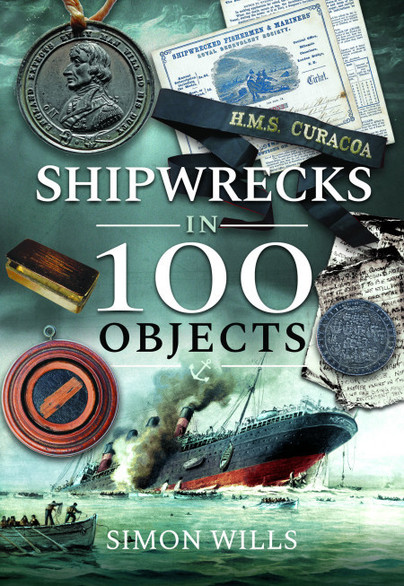 Preorder
Add to Wishlist
You'll be £20.00 closer to your next £10.00 credit when you purchase Shipwrecks in 100 Objects. What's this?
+£4.50 UK Delivery or free UK delivery if order is over £35
(click here for international delivery rates)

The history of shipwrecks involves many shocking episodes: from men who saw shipmates eaten by sharks, to castaways who ate each other. Learn about the cowardly captain who deserted his passengers on a sinking ship, the obstinate ship-designer who took 480 men to their deaths, and the first mate who wrecked his own ship for insurance money.

Historian and genealogist Dr Simon Wills is maritime adviser to BBC’s Who Do You Think You Are? programme. In this fascinating book he uses objects associated with real incidents as touchstones for every tale. Our ancestors believed that sea monsters destroyed ships, but better-established causes include storms, war, pirates, human incompetence, fire and ice.

The pages of this book are packed full of tales of dramatic rescues and miraculous survivals, and as well as the stories of the innovations that have improved safety at sea. Meet the man shipwrecked three times within an hour, a coastguard still diving overboard to save lives at 79, and the lifeboat inventor who endured someone else taking credit for his work. Ships can have character too: refusing to sink despite overwhelming odds, or even returning to haunt us as ghost ships.

The dangerous life afloat stimulated pioneers to create the lifeboat service, offshore lighthouses, and lifejackets. Vessels lost at sea also inspired rewards for bravery, and artists and writers such as J.M.W. Turner, William Wordsworth, and Yann Martel the author of Life of Pi.

Featuring famous wrecks such as Mary Rose and Titanic, this book introduces other less well-known but equally remarkable events from our nautical heritage, some of which seem almost too extraordinary to be true.