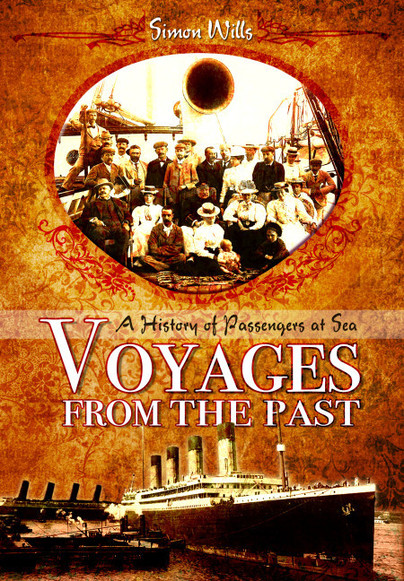 Voyages from the Past (Paperback)

Add to Basket
Add to Wishlist
You'll be £11.99 closer to your next £10.00 credit when you purchase Voyages from the Past. What's this?
+£4.50 UK Delivery or free UK delivery if order is over £35
(click here for international delivery rates)

I loved this book that talks about people travelling via ship during the century. Diffeent types of travels, ships, social classes.
I liked how the different travels were based on real life cases and was fascinated by the descriptions of the itinerary and how they travelled.
Highly recommended.

I thought this book was very interesting indeed. I remember my parents telling me that they were lucky to have migrated to Australia by plane, as so many others had to do it by ship and it took 3 months if you did. I can't even imagine being on a ship for that length of time, especially if you have small children with you as well.

Ship travel for passengers was fraught with danger, especially in the early days. Having to bring your own food, water and bedding, and hope that you didn't get sick or that the ship doesn't sink - they were very brave, those early pioneers! Even when my parents migrated, it was with the thought that they probably wouldn't see their relatives again, or at least, for years, but when you are migrating in the 1600's, just GETTING to your destination was not exactly guaranteed.

Very interesting first-hand accounts of travellers in different strata of society and going on these voyages for a variety of reasons.

I really enjoyed this book by Dr Simon Wills. It was very well written and I would definitely recommend this to anyone.

I have long been interested in all things ships. I have no idea why. I have never been on anything but a small yacht. When I discovered this book on NetGalley, I knew I had to read it.

This book uses the journals of passengers aboard various ships. They were journeying all over the world. It begins with a gentleman's account on a voyage to America in 1599 on a sailing ship.. The stories carry the reader all the way through the growth of the passenger trade and the modernization of ships.

What a difference! The inaugural passenger ships were primarily cargo carriers. In the early days, the travelers’ “cabins” were made of sheets of wood to separate the individuals and families and were no bigger than a twin size bed. In this space, the families were supposed to live, store their bedding (they had to bring their own), and their implements needed for farming or whatever trade they were seeking upon arrival. Pirates were also a concern on early voyages.

The crews on the early ships were not kind to the passengers. They derided those who were seasick and said some heinous things to them.

Paddlewheel steamships made their entry into the England to New York passenger trade in the mid-1930’s. As the ships improved on propulsion and building materials, so too did the passenger accommodations.

These original before unpublished stories are both illuminating and interesting. I very much appreciated hearing the passengers' own voices. (And how English changed throughout the years.) This book is edited very well and includes all kinds of stories from the first passenger ships including some that foundered. I liked how the passengers were a mix from the very wealthy to the poor immigrants. There were some great photographs at the end of the book.