Add to Basket
Add to Wishlist
You'll be £30.00 closer to your next £10.00 credit when you purchase The Duke of Wellington in 100 Objects. What's this?
+£4.50 UK Delivery or free UK delivery if order is over £40
(click here for international delivery rates)

Arthur Wellesley, the Duke of Wellington, was the outstanding British individual of the nineteenth century. His victories at Seringapatam and Assaye extended British control in India and his famous campaign in Spain and Portugal helped to drive Napoleon into exile. Wellington is, of course, mostly remembered for defeating Napoleon at Waterloo and his prestige after that epoch-changing event saw him becoming Prime Minister of Great Britain on two occasions.

These are the commonly-known facts about the Iron Duke, but in this remarkable investigation into the life of Britain’s greatest general, we learn so much more about Wellington as a person, through the objects, large and small, that marked key episodes in his personal, military and public life. Renowned historian Gareth Glover details Wellington’s family background in Ireland, his early military career, his one-and-only meeting with Nelson, his campaigns in Flanders, the Iberian Peninsula and Waterloo. What we also learn is of his difficult marriage – and his scandalous womanising, even bedding the same woman as Napoleon – and his strained relationship with his two boys.

His political career was a controversial one, including his fight to pass the Catholic Emancipation Bill and of a period of three months when he ran the government by himself because he refused to appoint any Cabinet ministers!

Packed with more than 200 full-colour photographs, The Duke of Wellington in 100 Objects will show the world the objects he touched, or which touched him, in the life of one of the most outstanding characters Britain has ever produced.

This companion volume to Napoleon in 100 Objects deals with Arthur Wellesley, the Duke of Wellington. His victories at Seringapatam and Assaye extended British control in India and his famous campaign in Spain and Portugal helped to drive Bonaparte into exile. Wellington, ‘the Iron Duke’, is, of course, mostly remembered for defeating Bonaparte at Waterloo and his prestige after that epoch-changing event saw him becoming prime minister of Great Britain on two occasions. Packed with more than 200 full-colour photographs this fascinating investigation into the life of arguably Britain’s greatest general, sheds light on Wellington as a person, through the objects, large and small, that marked key episodes in his personal, military and public life. Although his reputation may have faded a little now, in his day he was an equal giant to Napoleon Bonaparte on the world stage.

"The Duke of Wellington in 100 Objects is generously illustrated with photographs and contemporary images to illustrate all aspects of his life: from his military career, his family life, his political activities, to his final years. It is a veritable encyclopaedia of his life with entries illustrated with images some of which I have not seen before. It is a book that covers all aspects of his story and makes for a valuable addition to any library on the subject."

Overall, this is a fact-filled, treasure trove of information that will inform and
entertain anyone who wishes to discover more about the Prince of Waterloo.

This collection of 100 objects that are connected to his life make for a superb and intensely interesting collection, informing and educating at the same time.

With over 200 colour photos and excellent production and design, this is a treat for anyone interested in the life of the Iron Duke.

Every item has two or three pages which makes this book easy to pick up at odd moments for a ‘little read’ but be warned it is easier to pick up than to put down. One may intend to read one section but then sees the picture of the next item so one reads on and ten minutes soon becomes half an hour.
The range of the objects chosen is very wide from ivory miniatures to monuments on mountains, from violin to Tipu’s cannon. This is an illustrated biography that visits many bye ways in the Duke’s life.
The publication is of a high quality; the photographs are beautifully presented.

And in the process of examining this wealth of material, which is frequently supplemented by other related stuff, we learn masses about not just the famed and celebrated victor of Waterloo, but his family, the times in which he lived, and the many and varied places his life story connects together.

The device of telling history through the connections of an individual to objects and locations is well proven and this book is excellent at leveraging nuggets of information through the ‘object’. Indeed, I was surprised and pleased to discover through the first ‘object’, the house where Wellington was born (or where at least his birth was announced) in Merrion Street Dublin was a place I had stayed in on visits to that city. Throughout the book the ‘objects’ offer a deeper insight into Wellington and it makes for a very interesting read. 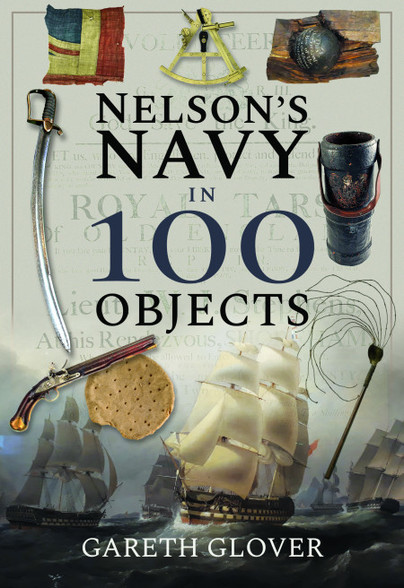 The Royal Navy of Nelson’s time was such a huge organisation, that it is sometimes hard to comprehend its full scope. Indeed, during the Napoleonic Wars it was by far the largest employer in the entire world. Not only did the Royal Navy maintain a fleet of close on 1,000 ships, including over 100 line of battle ships, but it was also responsible for the entire organisation of maintaining them at sea. From the recruitment of crews, the maintenance and protection of bases throughout the world, the production and delivery of food supplies to feed this vast fleet and the procurement of naval supplies…

Click here to buy both titles for £55.00
More titles by Gareth Glover