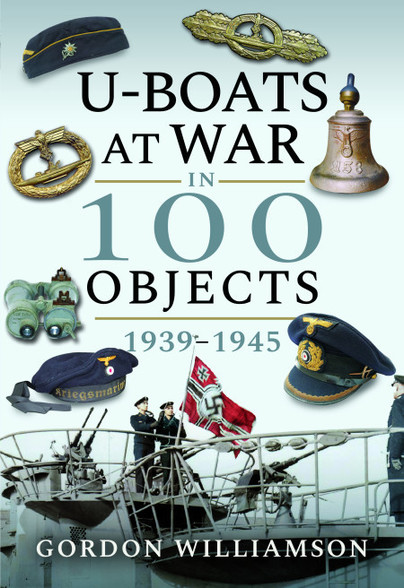 
Dealing with topics in a ‘100 objects’ has become a popular way of presenting a fresh perspective on a subject. When done well this approach can be illuminating, bringing together a diverse range of ‘objects’ from the familiar to the obscure. I previously covered the impressive The Third Reich in 100 Objects . Taking the idea into a more specific area is U-Boats at War in a 100 Objects 1939-1945 - another well designed collection. An excellent overview which both introduces the scope of U Boot warfare and delves into some unexpected aspects.

This slim volume makes an important contribution to our understanding of the U-Boat campaign and how it was fought on each side. The breadth of topics, and the way in which the illustrations bring them to life, will offer much both to the general reader and to those with more knowledge of the history. In addition to the objects which explain the strategy, tactics and weapons, perhaps the most lasting impression is of those which relate the experience of the sailors and airmen, particularly the U-Boat crews. This book is highly recommended.

An interesting and well-documented book with a magnificent presentation.

An interesting book for those who are interested in WWII U-Boats, the crews and equipment.

Launched during the last days of the Third Reich in an attempt to restart the Battle of the Atlantic, the majority of these revolutionary Electro-U-boats never saw action. Instead they became the forebears of the Cold War’s much dreaded hunter killer submarines. The massive Type XXI was planned to replace the conventional ‘Atlantic’ U-boat that had seen service so far in the war. The Type XXIII was a smaller coastal version. The new Electo-U-boats were the first submarines to operate primarily submerged, as opposed to spending large periods of time on the surface. Hitler’s new designs…