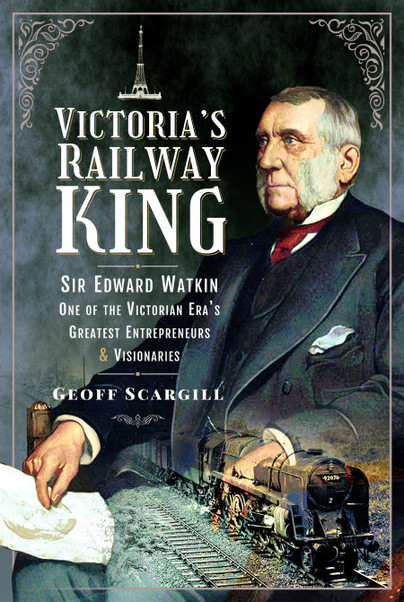 Sir Edward Watkin, One of the Victorian Era’s Greatest Entrepreneurs and Visionaries

You'll be £19.99 closer to your next £10.00 credit when you purchase Victoria's Railway King. What's this?
+£4.50 UK Delivery or free UK delivery if order is over £35
(click here for international delivery rates)

The accomplishments, and initiatives, both social and economic, of Edward Watkin are almost too many to relate. Though generally known for his large-scale railway projects, becoming chairman of nine different British railway companies as well as developing railways in Canada, the USA, Greece, India and the Belgian Congo, he was also responsible for a stream of remarkable projects in the nineteenth century which helped shape people’s lives inside and outside Britain.

As well as holding senior positions with the London and North Western Railway, the Worcester and Hereford Railway and the Manchester, Sheffield & Lincolnshire Railway, Watkin became president of the Grand Trunk Railway of Canada. He was also director of the New York, Lake Erie and Western Railways, as well as the Athens–Piraeus Railway.

Watkin was also the driving force in the creation of the Manchester, Sheffield and Lincolnshire Railway’s ‘London Extension’ – the Great Central Main Line down to Marylebone in London. This, though, was only one part of his great ambition to have a high-speed rail link from Manchester to Paris and ultimately to India. This, of course, involved the construction of a Channel tunnel. Work on this began on both sides of the Channel in 1880 but had to be abandoned due to the fear of invasion from the Continent.

He also purchased an area of Wembley Park, serviced by an extension of his Metropolitan Railway. He developed the park into a pleasure and events destination for urban Londoners, which later became the site of Wembley Stadium. It was also the site of another of Watkin’s enterprises, the ‘Great Tower in London’ which was designed to be higher than the Eiffel Tower but was never completed.

Little, though, is known about Watkin’s personal life, which is explored here through the surviving diaries he kept. The author, who is the chair of The Watkin Society, which aims to promote Watkin’s life and achievements, has delved into the mind of one of the nineteenth century’s outstanding individuals.


"This is a very readable book which brings out Watkin’s character and energy and is well worth a read."

The author of this book has clearly done a great deal of research into one of the key ‘movers and shakers’ of the Victorian era, and his interest in social justice, as a former comprehensive school headteacher and union official, shines through in his description of the life and works of Sir Edward William Watkin. An enjoyable read.

The primary intentions of explaining his character and the true breadth of his actions are successfully achieved, revealing the vision and ability that led to so many achievements. It provides an interesting addition to current literature and will be valuable in promoting this important Victorian pioneer.

An interesting look at Sir Edward Watkin who was a man of action for the time and very much involved with many railways both home and abroad. One of his aims was to set up a through route from Liverpool and Manchester in the north to the continent via London where he was chairman of the Metropolitan Railway and Kent where he was chairman of the South Eastern Railway. He was also involved with early digging for a possible Channel Tunnel. This book is recommended for readers to learn about the early years of his life and family and how he started out on his many early railway successes.

This book is highly readable.

Victoria’s Railway King looks at the life of a hardworking, determined and driven man in Sir Edward Watkin, a man from reading this book would seem one of those determined and opinionated men, driven by what he knew, had done and his determination to ‘get things done’ his way because he knew best. Because of his experience, this saw him as the go to man for all things regarding transportation, asked to travel the world to seek out important people/governments and fly the flag for the then Victorian Britain. But when you think about it, if you attain this position this is probably how you should act, along with the fact that he was a bit of a visionary. He had plans for a Channel Tunnel in 1880, helped develop a railway system in North America, created ‘parks for people’, and built the longest rail line in the world. Both a fascinating man and character, certainly one who should be celebrated more considering what he achieved. This period of time, in my opinion, should be celebrated more. I would like to see us celebrate Victorian Britain and the previous industrialisation of Britain.

Geoff’s excellent book – fascinating and an enjoyable read, can go a fair way to restoring the reputation of Victoria’s Railway King. It is earnestly and unreservedly recommended.

I enjoyed reading ‘Victoria's Railway King’. You have brought a sense of swagger and drama to the story, which it absolutely deserves. EW's early combination of political radicalism and canny networking compels respect. The story of the painting is an enjoyable bonus, and was wholly new to me.

I'll be recommending the book to anyone with an interest in the subject and the period.

I saw a talk by Geoff Scargill to the Railway & Canal Historical Society a few week ago. It was superb. I didn’t know anything about Sir Edward Watkin (1819- 1901 – exactly the same years as Queen Victoria) but by the end of the talk, I was hooked. I can see why a Watkin Society has been formed.

Geoff’s book – Victoria’s Railway King – is as good as the talk. The book’s subtitle is Sir Edward Watkin, One of the Victorian Era’s Greatest Entrepreneurs and Visionaries. And it’s accurate. We should thank Watkin for the five-day week. He persuaded business owners to close at lunchtime on Saturday and let their staff have a half-day off – the first step towards us having Saturdays off for relaxation as well as Sundays for church-going. In his twenties, he collected the money to buy the land for the first parks in Manchester – again, to improve the world for the working classes. He started the first Channel Tunnel. Parliament ordered him to stop after two miles had been excavated. When the current tunnel was being built in the ‘80s, the new tunnel breached Watkin’s 100-year-old tunnel. It was still bone-dry, a century after being boarded up.

In 1861, Watkin went out to British North America to rescue the inefficient Grand Trunk Railway from bankruptcy and closure (while he was on sick leave from his main job as General Manager of the Manchester, Sheffield & Lincolnshire Railway). He sacked an engineer who asked to work nights so he could carry out his own experiments during work time. The engineer’s name was Thomas Edison – you may have heard of him? The British Cabinet asked Watkin to carry out a small job on their behalf whilst he was overseas. They asked him if he could persuade the six colonies that comprised British North America to form one country/dominion. He worked his charm on the colonial governments and the result was Canada – and that was in between doing his day job, paid by the Grand Trunk.

The trouble is that Watkin could be very direct and focussed on getting stuff done. He could charm people when needed, e.g. the colonial governors of British North America, but he usually expected people to be rational intelligent grown-ups who would immediately see the benefits of his plans without him having to explain the details. Sadly, many were neither intelligent nor rational. The Government stopped Watkin’s Channel Tunnel because they were scared of French soldiers invading Britain via that route. One field marshal later admitted that if Watkins’ tunnel had been built, it would probably have shortened WWI by two years. Think how many young men would have lived and how different the twentieth century might have been.

This is an excellent book, telling us about a big man with big ideas, who was thwarted by pygmies. Read it and weep.

Such a great, informative read. Fantastic insight on parts of history previously unexplored in depth! Loved it and definitely recommend it.

This excellent book charts the career of one Victorian era’s greatest entrepreneurs. He had big dreams and this book does him proud.

I have just attended one of the most interesting (riveting would be a more accurate description) Zoom presentations I have seen. Geoff Scargill gave a talk to about 50-60 of us about Sir Edward Watkin. I knew very little about "Nimble Ned" but Geoff injected such emotion and passion into his talk, I was ready to weep at the injustice done to a man who died 120 years ago. The people's parks in Manchester? Ned created and funded those in his mid-twenties. The Channel Tunnel? Ned started to build one in Victorian times until the British Army worried about a French Invasion and made him stop. When the Chunnel was built in the 1990s, the modern engineers broke into Ned's earlier tunnel - it was bone-dry after over 100 years. Ned had a vision of another people's pleasure park in London. It would have a tower, taller than the Eiffel Tower, and facilities for the working masses to enjoy, including a football pitch. The firm building it all went bust and Ned's vision wasn't realised but the football pitch remained - it's called Wembley. The Canadian-Pacific Railway? Thank Ned for that. Whilst he was in Canada, getting it built, the British Government asked him to persuade the various independent British North American provinces to come together under a federal government. Ned talked to the politicians in each provincial government and gained their acceptance to federal oversight - it's called Canada.

I understand Geoff has written a book abut Sir Edward Watkin. Purely on the basis of that talk, I am pre-ordering the book, sight unseen. If it's half as good as Geoff's talk, it will be a cracker. And yes, publishers give me several books a week to review, but in this case, I'm placing an order before publication to buy it myself. I don't want to miss out on getting a copy. Geoff's talk was indeed that good. 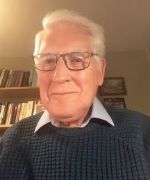 GEOFF SCARGILL was educated at Manchester Grammar School and Manchester University, where he graduated with honours in German. Since 1961, he has lived with his wife, Pam, in Stockport, and has one son, Peter. Geoff is a retired magistrate.He has been active for several years in raising funds for cancer research through giving talks on a variety of subjects, though the most in demand is his presentation on Edward Watkin. It is called The Last Laugh of the Railway King, which is the title of one of the chapters of this book. 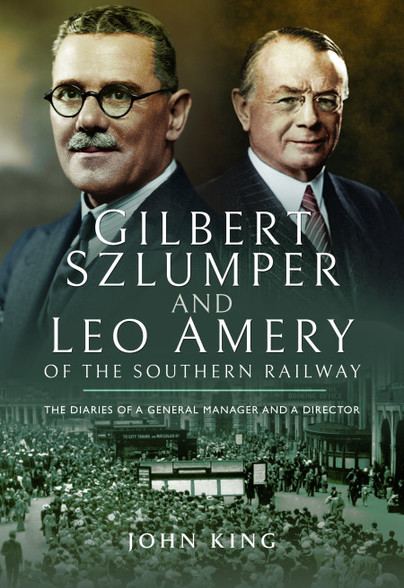 Very few diaries of directors and senior managers of the Big Four railways have survived to enter the public domain. There are, however, two notable Southern Railway diarists whose records have been available in archives for some years, but have been largely ignored by historians; Southern Railway General Manager Gilbert Szlumper and Director Leopold Amery. Their remarkable diaries are addressed in this insightful book, which gives a slightly different view of the company in contrast to the almost sanitised histories by some writers. The surviving diaries of Szlumper are far from complete. They…

Click here to buy both titles for £34.99
Customers who bought this title also bought...