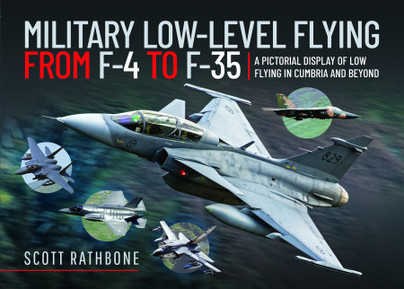 A Pictorial Display of Low Flying in Cumbria and Beyond

Preorder
Add to Wishlist
You'll be £20.00 closer to your next £10.00 credit when you purchase Military Low-Level Flying From F-4 Phantom to F-35 Lightning II. What's this?
+£4.50 UK Delivery or free UK delivery if order is over £35
(click here for international delivery rates)

The United Kingdom has some of the most dramatic landscapes that can be used by pilots to train in the vital skill of low flying. Aircrew preparing for operations in Afghanistan, Iraq and other potential war zones frequently hone their skills flying through the valleys of the UK, sometimes at near subsonic speed.

In Cumbria, as well as other major training areas within the United Kingdom Low Flying System, such as parts of Scotland and the world-famous Mach Loop in Wales, pilots can be seen on an almost daily basis sharpening their skills as they weave their aircraft, from basic trainers to the latest high-tech fighters, between the hillsides. As a result, these locations offer remarkable opportunities for photographers to capture close-up and dramatic shots.

These sights have captured the imagination of many photographers who have devoted many hours and displayed great patience in waiting to snap dynamic images on camera, the majority of these since the birth of digital photography. Whilst photographs of military low flying prior to the digital age are rare, in the pages of this book the author presents a selection of images to showcase just how things have developed since the 1980s – particularly focusing on the action to be seen over the hills and valleys of Cumbria and the Lake District which, since 1979, has been a major area in the training of military pilots.

In these pages are amazing shots of scores of different types of aircraft, from Jet Provosts, Buccaneers and Hawks through to F4 Phantoms, A-10 Thunderbolts, Tornadoes, Typhoons, and F-35 Lightnings, to name but a few. Types such as the Chinook and Sea King represent the many rotary aircraft. Unlike the photographs from air shows, none of these were staged; they are all action shots taken spontaneously as the aircraft whistled by Scott Rathbone and his trusty camera.

SCOTT RATHBONE was born in Altrincham, South Manchester in 1971. A train driver with a 33-year railway career, he is one of two drivers involved in setting a speed record for a train journey between Glasgow and Manchester. A keen fan of sports, particularly football, cricket, tennis and motor-sport, he became fascinated by aircraft during 1982 with the media coverage of the Falklands conflict and family visits to Manchester Airport. Having had an interest in photography since the late 1980s, he expanded that through the 1990s with his low-level photography exploits starting in 2001, the same year that he had his first image published in a major magazine. Now living in Poynton, Cheshire, Scott has embarked on producing his first book, looking back on his own memories of time spent in the valleys of the UK, with help from friends and other like-minded enthusiasts.