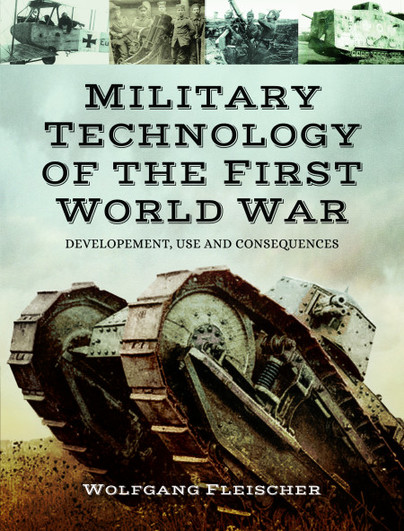 Development, Use and Consequences

Add to Basket
Add to Wishlist
You'll be £25.00 closer to your next £10.00 credit when you purchase Military Technology of the First World War. What's this?
+£4.50 UK Delivery or free UK delivery if order is over £35
(click here for international delivery rates)

Like any war before or since, the First World War formed the catalyst for a wealth of technical inventions with only one goal in mind: to inflict as much damage on the opponent as possible. No one would have dreamed that as a result of these new technologies, the death tolls on all sides would be so high, nor would the physical destruction of the opposition have seemed possible.

In this new work, Wolfgang Fleischer has meticulously documented all the weaponry was used by the Central Powers and their opponents, including machine guns, artillery guns, gas, the first armored combat vehicles, aircraft and submarines.

The book is well illustrated, with a good selection of contemporary photographs, supported by maps and plans. The excellent text is supported by a good selection of eyewitness accounts, describing the impact of the new technology on those at the front end. The book's strongest point is that it covers the German point of view - unsurprisingly the majority of English language books on this topic focus on the British point of view, with German innovations seen through the mirror the British response to them (for example focusing on the development of gas masks instead of the changes in types of gas and launching equipment). There is also more material on the purpose of each piece of technology and its impact and less on the nuts and bolts details of different variants than is often the case. Overall this is an excellent piece of work, and a useful addition to the literature on First World War military technology.

The author takes each aspect in turn and covers them extremely well. From the weapons, such as machine guns and artillery to tanks he includes first-hand accounts from both sides, which is fascinating. Mine warfare was another aspect of the war and here it is also covered. The essentials to keep the war going, the logistics, makes for absorbing reading, as the weight of ammunition in the millions of tons is covered. Absorbing and full of detail, this is a reference book which comes highly recommended and should be on the shelf of anyone interested in military history of the First World War.

This is an innovative look at the technology behind familiar inventions that were used during the Great War.

Importantly, the reader is reminded that weapons and new vehicles of technology could not change the course of the war alone. This was done by people who developed them, who met the material requirements for their mass production and brought to bear their attributes to the battlefields. Ultimately these were the decisive factors behind victory for the Entente in the First World War. The book reinforces throughout that the historical debate on the war cannot be limited to the technical innovations and their influence on strategy and tactics. The First World War proved again that the resolution of military conflicts did not rest alone on wiping out the enemy military potential, but resulted from combined factors.

This book is complimented throughout marvellously by some great photos of German armament works, coloured images of field artillery and images from the front, such as the impact of gas. Overall the book is a perfect addition to the bookshelf for anyone interested in the weapons of the First World War. But, equally, it would of interest to someone who also has an underlying interested in the science and mechanisms of such weapons, and - more widely - how their use slotted into the devastation that so many went through on the Western Front.

The pictures in the book are incredible. They not only show a large amount of obscure armaments, but also allow us to glimpse the life of a soldier from a hundred years ago. The illustrations of bunkers, guns, and ammo teaches you how the war's nuts and bolts really worked… For those interested in the military technology of the First World War, this book is an instant buy. For those of us who are interested in obscure and sometimes one of a kind weapons this should also be on your shelf.

The author has looked closely at the amazing technical advances made during WWI from the perspective of the land campaigns. Extensively illustrated, this is a very efficient review of the use and consequences of technology developed to achieve domination on land, including the part aircraft played in assisting land commanders.