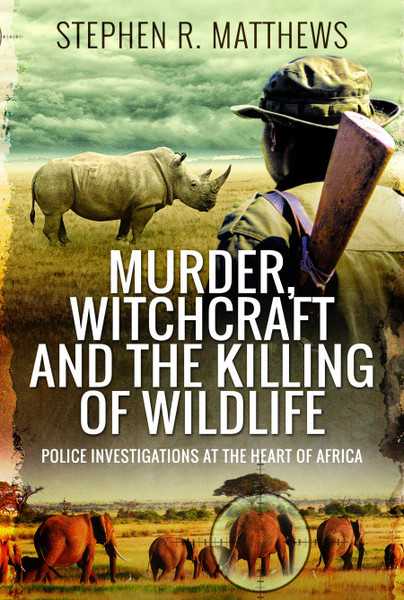 Murder, Witchcraft and the Killing of Wildlife (Hardback)

Add to Basket
Add to Wishlist
You'll be £25.00 closer to your next £10.00 credit when you purchase Murder, Witchcraft and the Killing of Wildlife. What's this?
+£4.50 UK Delivery or free UK delivery if order is over £35
(click here for international delivery rates)

An deftly written, impressively informative, and inherently riveting read from first page to last, "Murder, Witchcraft and the Killing of Wildlife: Police Investigations at the Heart of Africa" is an extraordinary and detailed memoir that will prove to be an immediate and enduringly popular addition to both community and college/university library.

I had a good time reading this book, it was a interesting topic that had me hooked from from the beginning.

.. An illuminating, enthralling and often macabre and shocking, story of a young family man in what is now Zambia. A first-class memoir of a way of life long gone, a distant glimpse of life, when not only the British Army were deployed across the Empire but young men, some ladies, lived adventurous and frequently perilous existence policing well outside any comfort zone. Just read the story of the young inspector and local women saving children from a crocodile, the policeman losing a leg. They were both awarded the GM. It would be interesting to know where all these police officers, these adventurous souls, went as the Empire reduced with job opportunities disappearing. So many questions, so many opportunities for fascinating research and publications.

This is a simple message to tell you how much I enjoyed the book 'Murder, Witchcraft, and the Killing of Wildlife'. I saw a blurb for it in, I believe, The New York Times, and upon that I bought a copy. I really enjoyed it and loved reading about the tales of that particular time period in Northern Rhodesia. Of course I really enjoyed the tales about Doberman, Alex.

Each in its own way, these books track important changes in the legal systems that deal with heinous crimes against men, women and children. So, what’s left — animals? Well, yes. Stephen R. Matthews covers that ground in MURDER, WITCHCRAFT AND THE KILLING OF WILDLIFE: Police Investigations at the Heart of Africa. It’s tough to compete with witch doctors, gun runners, government assassins, mercenaries and assorted other strong personalities of that ilk, but the author’s magnificent Doberman, modestly named Alex, comes off best in this rattling good memoir by a former British police officer writing of his colorful career while on assignment in Congo. As a visitor to the police station patiently explains his complaint to the desk sergeant: “You know, this is all about witchcraft and of course, the Bwana’s big brown dog Alex knows who did it.” I mean, what’s not to love about a story featuring a canine revered for his courage, sagacity and insight into human malfeasance?

In between solving murders and settling village grievances, Matthews is frequently called upon to deal with a variety of local scams, like the self-serving hustle of a mortician who has convinced a woman that her dear departed husband would be restored to life if she would have sex with him — the mortician, not the dead husband. But the soul of the book resides in the author’s efforts to stem the evil practices of slaughtering endangered wildlife and dealing with foreign agents in the dirty business of smuggling animal parts.
Despite his best attempts, Matthews could never shake off the way the locals saw him, as a white witch doctor with the ability to speak with the spirits of the dead and place spells against the living. There’s a story — several, in fact — about what led to this perception, which proves that, at the very least, the author learned a thing or two about telling a tale.