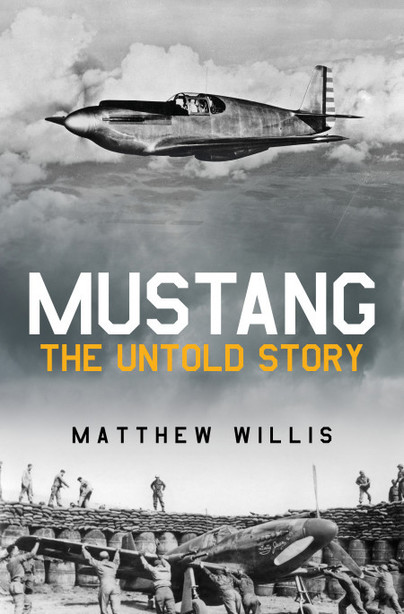 Preorder
Add to Wishlist
You'll be £16.00 closer to your next £10.00 credit when you purchase Mustang: The Untold Story. What's this?
+£4.50 UK Delivery or free UK delivery if order is over £35
(click here for international delivery rates)

The North American Mustang is one of the most well-studied aircraft. However, much of what is commonly understood about it, particularly its early, Allison-powered variants, is not entirely correct. This book examines the history of the aircraft afresh, within the orbit of tactical doctrine, strategy and even politics, as well as the changing nature of World War II. The Allison Mustang proved to be no worse than the best aircraft of the war in the roles where it found its niche and, through this new study, it is hoped that the significance of this vital aircraft can finally be appreciated.

Matthew Willis is a writer and historian of aviation history. His first work of non-fiction was published in 2007, the first full-length work on the Blackburn Skua World War Two dive-bomber/fighter. Since then, he has focussed on lesser-known areas of aviation history, particularly with regard to naval aviation, with titles on the Fairey Flycatcher, Blackburn Shark and Fairey Barracuda, and he wrote the first biography of the 1930s–40s test pilot Duncan Menzies. He focuses on original research and bringing out the voices of those who were there at the time. He is a frequent contributor to the historic aviation media, with many features published in journals such as Aeroplane, Flight Path, The Aviation Historian and Flypast, and currently writes the regular ‘Flight Line’ column on aviation history in Aeroplane. He has also contributed to heritage projects and has written for the Naval Records Society. He runs the website Naval Air History (www.navalairhistory.com).