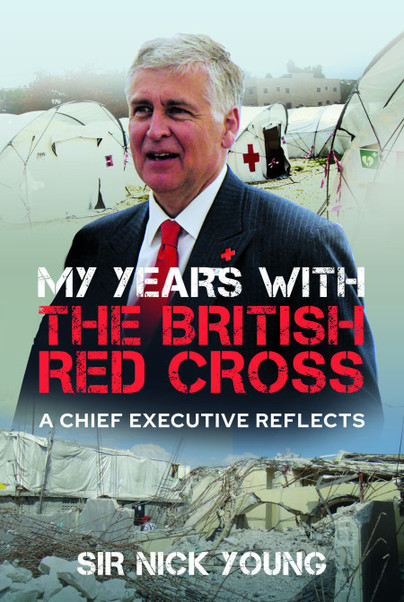 My Years with the British Red Cross (Hardback)

Preorder
Add to Wishlist
You'll be £20.00 closer to your next £10.00 credit when you purchase My Years with the British Red Cross. What's this?
+£4.50 UK Delivery or free UK delivery if order is over £40
(click here for international delivery rates)

Sir Nick Young’s memoir is a fascinating and candid account of his thirteen years as chief executive of the British Red Cross (2001-2014). During this critical period he led the organisation’s response to the financial crisis, the Iraq War, the Asian Tsunami, the London bombings, a kidnapping, the fighting in Syria, media challenges, and numerous earthquakes, floods and other disasters.

The author shares the strains and moments of fulfilment, relief and humour, as he played a key role in the response to some of the 21st Century’s most dramatic and dangerous events. His book paints a vivid yet modest picture of what is involved running one of the world’s best-known disaster response organisations, reacting to catastrophes, both man-made and natural, and saving the lives and livelihoods of those caught up in global disasters, conflicts and health emergences.

It is rare for charity leaders to reveal their insights in this way and, at the same time, paint such a vivid picture of life at the top of a large voluntary organisation. The result is a compelling read, particularly for those interested in international affairs, the way charities work, and what makes them different from other types of world class organisations.

SIR NICK YOUNG’s distinguished career began as a corporate lawyer with one of the ‘Magic Circle’ law firms. After moving to East Anglia, he discovered his vocation as a charity worker, first with Sue Ryder and Leonard Cheshire, before becoming Chief Executive of Macmillan Cancer Support, and then Chief Executive of the British Red Cross, stepping down in 2014 after thirteen years.

He was knighted for services to cancer care in 2000, and received The Queen’s Badge of Honour in 2013. He was presented with the charity sector’s award for Outstanding Leadership in 2011, the Star of Italy in 2015, and an Honorary Doctorate at Birmingham University (2022). In retirement, he remains a charity trustee, adviser and consultant.

He is the author of Escaping With His Life (Pen & Sword, 2019), the story of his Father’s remarkable wartime experiences

Nick and his wife, Helen, live in Suffolk and have three sons.