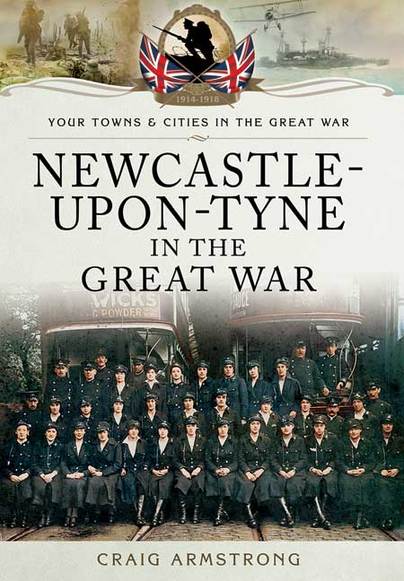 Newcastle-upon-Tyne in the Great War (Kindle)

Click here for help on how to download our eBooks
Add to Basket
Add to Wishlist
You'll be £4.99 closer to your next £10.00 credit when you purchase Newcastle-upon-Tyne in the Great War. What's this?
Need a currency converter? Check XE.com for live rates

With the large number of troops stationed in and around the area and its position as a major industrial city, which focused on armaments production, shipbuilding and heavy engineering, the realities of the war were always prominently felt in Newcastle-upon-Tyne. The city played a key role in the nation's war effort, as it was a key port and the nation's major exporter of coal – a vital link in keeping the war effort going.

The proud tradition of military service in the region was reflected in the huge numbers of Newcastle men and women who came forward to serve in the military or in roles such as nursing. The city was the recruitment centre and driving force for the formation of numerous 'Pals' Battalions and the Northumberland Fusiliers, which raised more battalions than any other regiment during the war.

For many of those left behind the war was a time of fear and hardship. This book documents the struggle that many suffering families faced in coping with rising wartime prices, longer working hours, endless worry, wartime policies and severe shortages. These issues are brought to light throughout, with a view to how they affected the people of Newcastle and how, with audacity and courage, Newcastle's citizens overcame them.

By the end of the war so many Newcastle men had been killed, and others faced an uncertain future in a shattered post-war economy. Despite this, the workers of Newcastle continued to provide incredible charitable support until the end of the war in addition to their already momentous efforts. These efforts are considered greatly in this enlightening book, which is a testimony to the bravery, self-sacrifice and determination of the people of Newcastle-upon-Tyne during the Great War.

Part of the excellent 'Your Towns & Cities in the Great War' series, this volume covers the part the city played in the war, both at home and overseas. A key port and the nation's major exporter of coal, it provided a vital link to maintaining the war effort. Huge numbers of men and women served in uniform and the city saw the creation of numerous Pals battalions and the Northumberland Fusiliers, who raised more battalions than any other regiment.