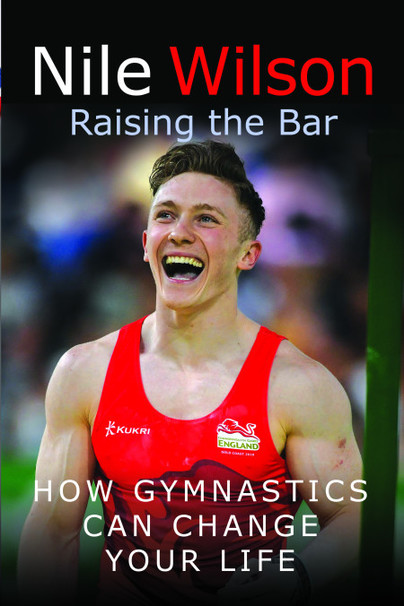 How Gymnastics Can Change Your Life

Add to Basket
Add to Wishlist
You'll be £12.75 closer to your next £10.00 credit when you purchase Nile Wilson: Raising the Bar. What's this?
+£4.50 UK Delivery or free UK delivery if order is over £35
(click here for international delivery rates)

Nile Wilson first shot to fame in 2014, when he became the only British gymnast to win five gold medals at the European Junior Gymnastics Championships.

The same year, he won four medals as a senior in the Commonwealth Games and is the current Commonwealth Champion on the horizontal bar. In 2016, he won bronze at the Rio Olympics and is tipped to win gold at the next World Championships and Olympics. He has recently won three gold and two silver medals at the Gold Coast Commonwealth Games.

Nile is also a YouTube sensation, with over 750,000 subscribers to his channel. His videos are not only educational, but also highly entertaining and to date have been viewed over 45 million times! Nile is very passionate about his sport and works tirelessly to encourage more people to get into gymnastics. His book will be a guide for anyone new to the sport and will show just how easy it is to get and stay fit using gymnastics.

When I saw the book, it was exactly how I thought it would be, the cover shows him at a competition and the blurb showed his positivity and passion for gymnastics that has always been apparent.


The first half of the book is him explaining how gymnastics has impacted him and changed his life, how it has affected his behaviour and mindset and what he feels he has learnt from it.

He also explains how he feels gymnastics and the positive mindset it needs can help everyone in their day to day lives, whether they are athletes or not. All things he has put online before and explained in interviews, but it was interesting reading it as it was slightly more in depth than I have previously seen from him.

The second half of the book is a 21-day challenge, that is meant to teach you how to do a handstand by the end of the challenge. The weeks are explained clearly, the exercises are shown well and overall the layout of the challenge works well.

It's not a hardback book but I like that for books like this so I can use it while attempting the exercise. Nile is an Olympic, Commonwealth and Wold Championship gold medalist with over 1million subscribers on his Youtube channel so he really does know what he's talking about. He goes into so much depth with the moves and even includes a 21 day challenge for YOU to attempt to do. He plans out the week for you - For example on week one - Monday is cardio, Tuesday is a handstand, Wednesday is focussed on mindset, Thursday is a full body workout, Friday is core work, Saturday is flexibility and Sunday is a rest day (whoop!!). So for the Monday session, he has set out a HIIT workout, complete with timings, exercises and images of him doing them so you can easily recreate the workout. Tuesday, he walks you through the steps to be able to do a full handstand....etc.

Interview with Nile Wilson as featured by

...absolutely incredible and I can thoroughly recommend it to anybody who is interested in sport or even just physical and mental wellbeing.