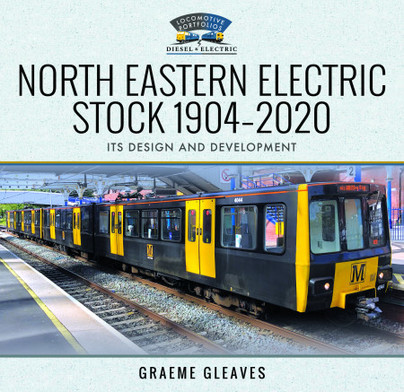 This book covers the history of electrified railways in the North East, one which goes back to the early twentieth century and saw a resurgence with the Tyne & Wear Metro system in the 1980s. With a generic introductory two chapters about the development of the North East, its industry and railways, and the North Eastern Railway in particular, it then goes on to describe in more detail the stock used by the NER, LNER, British Railways and then the Metro system. It is more of an overview of the various types of stock that have been used in the North East and a chapter on the other NER electric locomotives built, with a lengthy 14-page appendix on the preserved British Railways Tyneside electric unit owned by the author. Well-illustrated, certainly in terms of the coverage of the North Eastern Railway.

"If history, understanding and detail of the Northern Eastern Electric railways is what you are looking for, this book is for you."

"Those whose interests are broader than conventional tramways will find much in this new publication to please them."

Graeme Gleaves’ book is a thoroughly competent and readable account of Tyneside electrification through all its stages, and is illustrated with an impressive selection of black and white and colour views which will bring back memories for some and serve as a comprehensive history for those unfamiliar with the area’s railways.

"The author has an engaging style, covers the social and economic factors in the changing fortunes of the network thoroughly and has an eye for entertaining detail."

Another book in Pen & Sword's Locomotive Portfolios: Diesel & Electric series, this volume takes a new look at the North Eastern electric systems around Tyneside and Newcastle and the stock used. The author, who is a part of the team responsible for saving the only remaining Tyneside 2EPB unit (currently under restoration at the Battlefield Line, Shackerstone), looks at the history of railways in the area and the start of the electrification schemes by the North Eastern Railway in 1904, through LNER ownership and decline under BR and eventual reversion to diesel traction on the Tyneside lines in the 1960s. Their revival as part of the Tyneside Metro concludes the history in a more positive note. Also included is the story behind the preserved unit and its outlook for the future. The book looks in detail at the various aspects of the lines and stock introduced over the time period covered. A good selecion of well reproduced photographs compliments the text. If interested in the Tyneside electrics you will find this book a valuable resource and reference. Recommended.

At the moment, we are being somewhat spoiled with an excellent range of well-written and attractively presented books. This is another volume that I could happily recommend for anyone with an interest in the development of electric railways, traction and rolling stock.