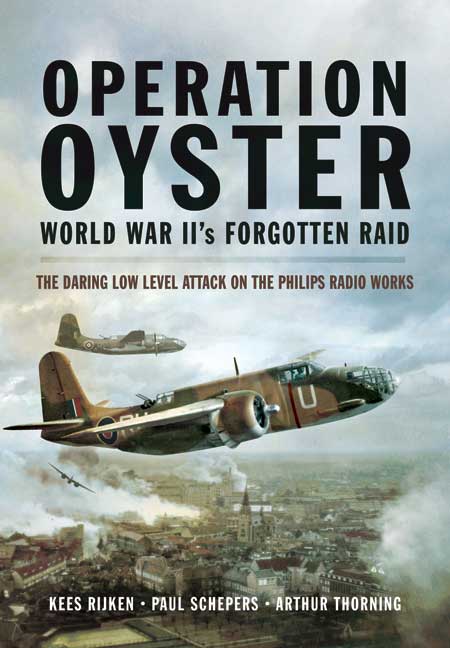 The Daring Low Level Attack on the Philips Radio Works

Click here for help on how to download our eBooks
Add to Basket
Add to Wishlist
You'll be £4.99 closer to your next £10.00 credit when you purchase Operation Oyster: WWII's Forgotten Raid. What's this?
Need a currency converter? Check XE.com for live rates

Operation Oyster was carried out on the 6th December, 1942 by 2 Group RAF. Considered to be a notable success for the allies, it cost the Germans an estimated six months of lost production time at a critical point in the conflict. It is arguable, according to the authors, that the operation was in fact rather more significant than Operation Chastise, the Dambuster raid, while accepting that was a remarkable feat of arms. Operation Oyster struck at the very heart of what Churchill termed 'the wizard war' against German radio navigational technology by attacking a central hub of activity; the Philips Radio Works in Eindhoven, The Netherlands.

The development of electronics in WWII was the most significant technical aspect of weaponry over the course of the conflict. On both sides, there were great advances in radar and communications which, at that time, depended on the wide- scale use of high frequency radio valves – few companies had the technology to produce these, but the leading one in Europe was Philips in Eindhoven. Thus it was determined that Philips was the most important target.

Ninety-three allied aircraft took part and a total of fourteen were lost. But the result in terms of damages to the enemy was considerable, hindering the German war effort significantly and consequently aiding the allies. Despite these facts however, the story of the raid has been underreported, and the efforts of the aircrew who took part have been little recognized. By comparison, the Dambuster raid which came six months later has entered into folklore. Here, for the first time, the overlooked Oyster raid is afforded the attention it deserves.

The authors have done a fantastic job of packing a huge amount of information and rare photographs into this book.

A highly detailed record of what happened to the town and its factories and how the [Phillips] company functioned under wartime occupation.

This book is recommended to everyone interested in the air war. Very good.

A fascinating book... The second half is something you don't often see included, and that is copies of all the source documents used in the research on the raid. ... I found these as fascinating to read through as the story of the raid itself.

I think this book will come to be seen as the definitive account of what was an important raid. The book is written in a professional yet very readable manner leading the reader in an entirely logical manner from inception of the raid to its aftermath.

The transcribed contemporary documents at the rear are an agreeable bonus. They make accessible to the armchair reader information that could otherwise only be available from visiting the National Archive. Perhaps even more than the book itself, these give a direct insight into the methods in use at the time and the information available before, during and after the raid.

I can give this book an unreserved recommendation.

This book represents a collaborative effort in affiliation with Kees Rijken - who was an eye-witness to the raid - and Paul Schepers, whose original research into the raid forms the backbone of Thorning's narrative. Both are citizens of Eindhoven. This publication is a joint work by all three authors.

This book represents a collaborative effort in affiliation with Kees Rijken - who was an eye-witness to the raid - and Paul Schepers, whose original research into the raid forms the backbone of Thorning's narrative. Both are citizens of Eindhoven. This publication is a joint work by all three authors.

Arthur Thorning pursued a career in aviation, firstly in industry and then for twenty-one years with the UK Civil Aviation Authority. Since 1995 he has worked as an independent aviation consultant. He is a Fellow of the Royal Aeronautical Society and a Past Master of the Guild of Air Pilots and Air Navigators. He is the author of The Dambuster Who Cracked the Dam: The Story of Melvin 'Dinghy' Young, published by Pen and Sword Books in 2008.