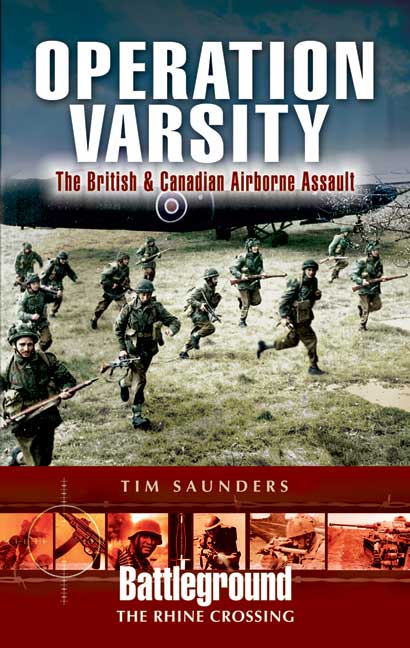 Click here for help on how to download our eBooks
Add to Basket
Add to Wishlist
You'll be £4.99 closer to your next £10.00 credit when you purchase Operation Varsity. What's this?
Need a currency converter? Check XE.com for live rates

In Spring 1945 the outcome of the war was ritually certain but the mighty River Rhine still stood in the way of the Allies. Eisenhower's strategy was to guarantee a crossing in the Ruhr area by allocating the main effort to Montgomery's 21st Army Group. Monty's task was to envelope and take out the last German war production and open the way onto the North German Plain. On the morning of 24 March 1945 the Normandy veterans of 6th British Airborne Division were to land just three to six miles in front of XII Corps, within supporting distance of their artillery, with the aim of linking up with the ground forces on day one. First in were the two parachute brigades, who benefited from the numbing effect of the Allied bombardment but by the time 6th Airlanding Brigade came in aboard their gliders, the German anti-aircraft gunners were recovering and, on the DZs, resisting and even counter-attacking the British and Canadian paratroopers. Casualties were heavy, not least because the Airlanding Brigade were gliding in amidst an armoured kampfgruppe. Despite their presence, the glider infantry of the Ox and Bucks and the Ulster Rifles took their bridges and the Devons fought a desperate battle for the key village of Hammelkeln. By evening, despite heavy losses, General Bols's 6th Airborne Division had linked-up with XII Corps, the airborne objectives had been taken and the gateway onto the North German Plain and final victory was open.

From Pen and Sword's acclaimed Battleground series of books comes this latest title. This is the third Battleground title which focuses on the Rhine Crossings. It covers the airborne aspects of the operation focussing on the British 6th Airborne Division. The airborne plan incorporated virtually every lesson of the disaster that befell the 6th Airborne Division at Arnhem. Special praise must go to this titles fantastic level of detail. Also accompanied by evocative wartime photographs.

lives up to the expectations set by its predecessors