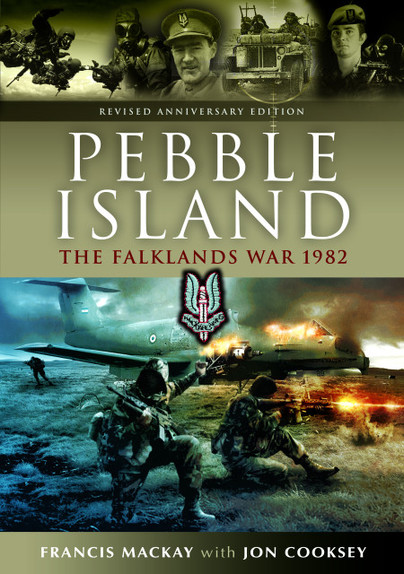 Add to Basket
Add to Wishlist
You'll be £14.99 closer to your next £10.00 credit when you purchase Pebble Island. What's this?
+£4.50 UK Delivery or free UK delivery if order is over £35
(click here for international delivery rates)

This is the story of the SAS raid on Pebble Island during the Falklands War.

In atrocious weather, 48 men of 22 SAS Regiment were landed by Sea King Helicopter on the Island. Their task was to destroy the 11 enemy aircraft located at the Airstrip on the Island and neutralize the Argentinean force posted there to guard it.

The raid was successful and all the Aircraft were destroyed but debate still goes on as to whether the raid was a political gesture to give the British Public some action or whether it was to knock out the Airbase that could have made life difficult for the landings at San Carlos Bay later in the War.

The book covers sections on: history of the engagement, training and planning involved, equipment used, weapons file, breakdown of forces engaged, consequences and controversies as well as personal accounts of those involved.

An accessible and fact filled history of this secret operation in the Falklands War.

Well worth the purchase.

Travel companies have been taking tours to the Falklands to see the battlegrounds and this title would be useful for such a trip. Covering the fighting on Pebble Island, the authors explain each phase and what was involved, including the air power, logistics and troops on the ground. The human endeavor would test the most physically strong and this, together with all the technical detail, is a well-rounded chapter of history.

This book looks back at the particular raid by the SAS on an Argentine landing ground set up on the Falkland Islands at Pebble Island. It was the first such raid undertaken by the SAS since WW2. The particular raid, though part of a larger mission, was known as Operation Prelim. There were 6 Pucara aircraft based on a grass landing field at Pebble Island and which were considered a significant threat to the planned landings of British troops. What we have is the detailed story of the planning and execution of the raid which succeeded in destroying all the Pucaras, along with a Shorts Skyvan and 4 Mentors.

This small extremely well presented book with clear illustrations, established the importance of denying the Argentinians the use of Pebble Island as a forward operating base from where they could attack any approaching shipping. The success of the raid without loss of life had a significant effect on the early stages of the war. For the un-initiated it is revealing to discover the level of planning and resources needed to mount such an operation, and as always, there are never enough people or the right equipment. It is a truism that no plan survives contact with the enemy and what is clear from the book, is the flexibility of those on the ground to evolve the plan as required.