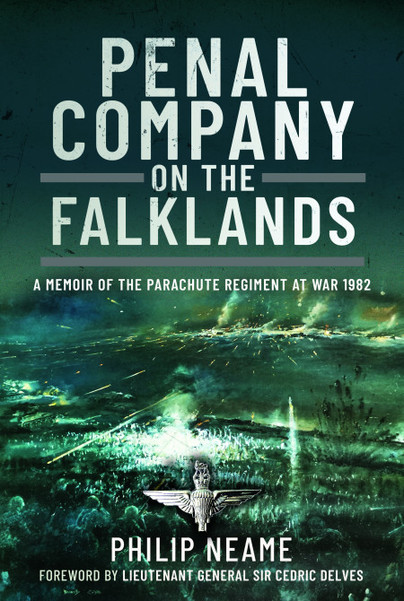 Preorder
Add to Wishlist
You'll be £18.75 closer to your next £10.00 credit when you purchase Penal Company on the Falklands. What's this?
+£4.50 UK Delivery or free UK delivery if order is over £35
(click here for international delivery rates)


Out of the very many books written about war and warfare only a notable few stand with real credibility, and truly take the reader into the mind and environment of the writer. Penal Company is one such. It deserves to be ranked as a classic of its type. On reading this you are taken into the confines of D Company 2 PARA, its character, its professionalism and the exceptional leadership of its commander.

Frank and gripping, but also moving and reflective, Philip Neame’s memoir is an insight into the realities of intense combat and its aftermath. Above all, it is fitting testimony to the spirit of the young recruits of the Parachute Regiment, and of the
company he commanded during the Falklands war.

Professor Helen Parr, author of Our Boys – The Story of a Paratrooper (Allen Lane 2018)

By far the best book I have read about the true realities of combat during the Falkland Island War. Self deprecating, thoughtful and funny, it is impossible toput down ‘Penal Company’ whilst
reading Philip Neame’s gripping account of D
Company’s battles of Goose Green and Wireless Ridge. At a time, when so much emphasis is being placed on high technology to win wars, Philip Neame clearly demonstrates that it is actually the fighting spirit and humour of the soldier that
succeeds when all else fails.

Beyond the subject, which is very interesting, it's one of the best I have read in a very long time. Not only the combat description, but also the doubts and challenges mentioned, the assessments of battles and leaders, the personal impressions and the final chapter are worthy of the (or at least, humbly, my) highest praise. All this, with a great narrative rhythm.

An enjoyable book, well written that found me engrossed and living the story.