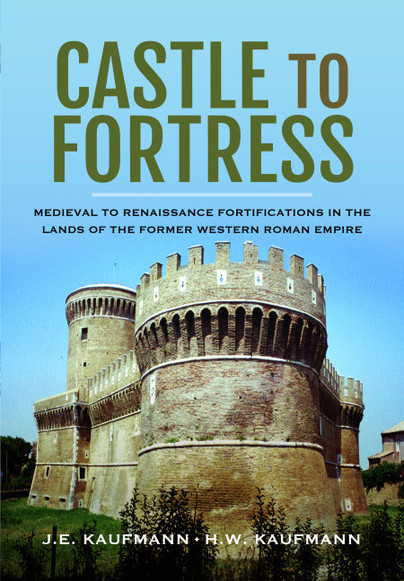 Click here for help on how to download our eBooks
Add to Basket
Add to Wishlist
You'll be £4.99 closer to your next £10.00 credit when you purchase Castle to Fortress. What's this?
Need a currency converter? Check XE.com for live rates

Across western Europe the long tradition of castle-building took on its most sophisticated form in the later medieval period and then, in response to the development of gunpowder weapons, it underwent a fundamental change – from castle to fortress. This, the second volume of a highly illustrated new study of medieval fortification, gives a fascinating insight into the last great age of castles and the centuries of violence and conflict they were part of.

It traces the advances made between the twelfth and the fifteenth centuries, looking in particular at the form these fortifications took in contexts as different as Italy, Wales, France and the Iberian peninsula. Many would regard this period in the history of castles as the classic age. It was followed by a phase of relative decline as the conditions of warfare changed and castles had to be adapted to cope with cannon. The conventional castle gave way to new styles of fortification. But, as the authors demonstrate, they were still essential factors in military calculations and campaigns – they were of direct strategic and tactical importance wherever there was an attempt to take or hold territory.

I like the photographic pages. These normally combine a plan of the castle or fortified town, some modern photographs of the remains, and when possible a Medieval or Renaiisance illustration of the same place. These often prove that these early illustrations are actually pretty accurate, including key features from the actual castle.

The passion that both authors have for their subject shows through almost every page and that passion is perhaps demonstrated by the simple fact that this is their umpteenth book on fortification (just put a search into Bookfinder).

So far as the overall coverage is concerned this is very much a precursor to Duffy’s works but, somehow with more feeling. Castle to Fortress takes the story of the development of fortresses (castles, etc.) from the early middle ages, through to the late fifteenth/early sixteenth and the birth of the Trace Italienne (hence my comment about this being a precursor to Duffy’s work). The geographical area studied is set out in the title and the chapters are arranged to set out the narrative by area/country. The book covers not only the evolution of fortification design over the period but also the reasons for the location of such a fortification, and how that location in turn influenced the actual design and layout of that fortification.

The text is clear and concise and whilst in a book of only 247 pages it isn’t going to be ‘the final word’ there is no doubt that if you want to study the subject then you are going to have to start with this book. If you want an idea of how widely the text is based then a simple perusal of the bibliography will have you reeling – hundreds of books in English, French, German, Italian, etc. This bibliography alone would make the book a vital starting point on the subject.

The authors’ knowledge of their subject is truly encyclopaedic and even the colour plates demonstrate their passion. On which it has to be said that the very large number of colour plates are, I suppose the word is, eccentric and are in most examples a “collage” of photos, maps, drawings and even postage stamps of a specific site. That may sound odd but it does actually work and you get a very good idea of the “castle” from the appropriate plate - perhaps more so than the more usual one or two photographs…

You might guess from the above that I really liked the book and would definitely recommend it to anyone with an interest if the fortifications of the earlier part of the Society’s period. If you want another recommendation then let me just say that after reading this book I searched for, and bought, the authors’ book covering the earlier period!

Definitely a book worth adding to your library.

Magnificent must-see continuation of his previous work "Castrum to Castle. Classical to Medieval Fortifications in the Lands of the Western Roman Empire." A subject of great historical interest.

This book traces the evolution of castles and fortified sites during the later Middle Ages, covering the period from 12th to 15th centuries. Authors of this wonderfully detailed and richly illustrated book take you on a journey through medieval England, France, Italy, Wales, Iberia and the Low Countries, discussing key examples of fortifications that shaped military thinking of the day. What's great about this book is that it's not only about the medieval fortifications themselves but also about the turbulent world of their time.
I discovered many beautiful castles throughout reading this book and I'm going to put them on my "to visit" list. I initially thought I won't be as interested in this book as I'm in others about the medieval period, but I couldn't put it down. Highly recommended.

It is a book that I recommend for those who want to know the history and evolution of defensive architecture at the turn of the late Middle Ages and the beginning of the Renaissance.

Another of the Kaufmann series of interesting books with lots of detail.

This, the second volume of a highly illustrated new study of medieval fortification, gives a fascinating insight into the last great age of castles and the centuries of violence and conflict they were part of.

The Kaufmanns examine the transition from vast medieval family homes to places of safety and security in a fascinating treatise on the way such buildings were modified to provide protection from growing threats.

This book follows on from its predecessor ‘Castrum to Castle’ by tracing the development of fortifications in the late medieval period through the radical rethink demanded by the increasing effectiveness of gunpowder weaponry. Designs of fortifications change to reflect the physics and power of cannon, delivering defences that looked quite different. The authors have clearly expended large amounts of time in presenting each castle/fortress with exceptional maps and photographs that give context, coupled with the relevant history. A good read and a good reference book.