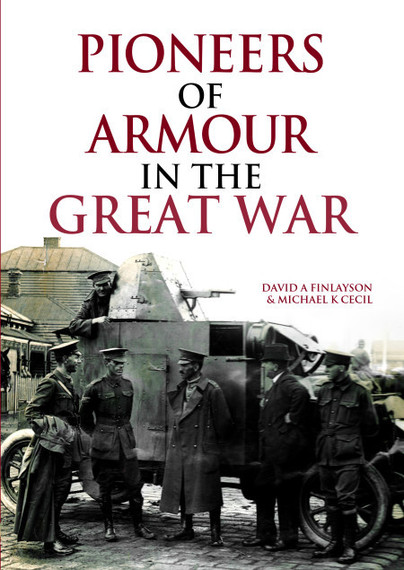 Pioneers of Armour in the Great War (Hardback)

Add to Basket
Add to Wishlist
You'll be £30.00 closer to your next £10.00 credit when you purchase Pioneers of Armour in the Great War. What's this?
+£4.50 UK Delivery or free UK delivery if order is over £35
(click here for international delivery rates)

The 1st Armoured Car Section was raised in Melbourne in 1916, the brainchild of a group of enthusiasts who financed, designed and then built two armoured cars. Having persuaded the Australian Army of the vehicles' utility in the desert campaign, the armoured car section, later re-equipped with Model T Fords and retitled the 1st Australian Light Car Patrol, provided valuable service until well after the Armistice.

The First World War also saw the emergence of the tank which, despite unpromising beginnings, was to realise its potential in the crucial 1918 battles of Hamel and Amiens. A British Mark IV tank which toured Australia in 1918 demonstrated the power of this new weapon to an awestruck Australian public.

Much of the story of the armoured cars is told in the voices of the original members of the section and in newspaper articles of the time which highlight the novelty of these vehicles. Painstaking research has produced a remarkable collection of images to accompany the narrative, many never previously published. Biographies of the members of these extraordinary units are also a feature of this book, their stories told from the cradle to the grave. Appendixes provide a wealth of supporting biographical and technical information that enriches the text and adds factual detail.

Histories of the Long Range Desert Group always refer back to the exploits of the light car patrols of the First World War, often with some amazement that they were able to achieve what they did using thin wheeled Ford Model Ts. This book helps to explain how those early pioneers of mobile motorised warfare were able to achieve so much, with what to later eyes looks like very primitive equipment.

This interesting and comprehensive book cover the actions of two little known units.
The book is well illustrated with comprehensive and useful appendices and demonstrates meticulous research and expert knowledge. Recommended.

This is a very detailed and useful book which fills an important gap in our understanding of the history of Australian armour. At the same time, it is timely reminder of the rapid and universal change which warfare brought to technology on the battlefield at this time.

...this part of the history of the Australian tanks, it seemed to me a very interesting and instructive documentation.

Authors David A Finlayson and Michael K Cecil set the scene in fine detail, while the conflict is brought back to life via letters home, period articles and outstanding archive. A must for militaria buffs.

This Australian perspective has been well-researched and provides a view of all types of armoured vehicles employed during WWI. Descriptive text is supported by many interesting and rare images through the body of the book – Most Highly Recommended.

A brilliant third book this month about the Australian contribution to the Great War, this time concentrating on the subject of armour and armoured vehicles. Superb.

Michael K. Cecil (BSc Hons, BA, Cert IV Museum Practice) was born in Melbourne, Australia in 1955. He held the position of Head of Military Heraldry and Technology at the Australian War Memorial until retiring in mid-2010. Since his retirement, he has continued to research Australian military history. In August 2013, he was awarded a ‘Certificate of Appreciation’ by the Royal Australian Armoured Corps for his lengthy and significant contribution to recording the history of the Corps.

David Finlayson (MEd, BA, Dip Ed, & Grad Dip Ed) was born in Melbourne in 1964. He served in the Army Reserve with the 4th/19th Prince of Wales’s Light Horse Regiment in the early 1980s. In 1983 joined the Department of Defence later resigning to join the Victorian Education Department in 1990. He teaches history at a northern metropolitan secondary college and is the Honorary Historian for the RAAC Officers Mess at the School of Armour.