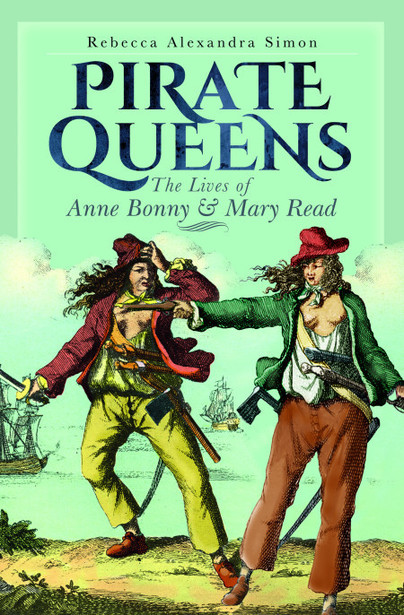 Add to Basket
Add to Wishlist
You'll be £16.00 closer to your next £10.00 credit when you purchase Pirate Queens. What's this?
+£4.50 UK Delivery or free UK delivery if order is over £35
(click here for international delivery rates)

Between August and October 1720, two female pirates named Anne Bonny and Mary Read terrorized the Caribbean in and around Jamaica. Despite their short career, they became two of the most notorious pirates during the height of the eighteenth-century Golden Age of Piracy. In a world dominated by men, they became infamous for their bravery, cruelty and unwavering determination to escape the social constraints placed on women during that time. Despite their infamy, mystery shrouds their lives before they became pirates. Their biographies were recorded in Captain Charles Johnson’s 1724 book, A General History of the Pyrates, depicting the two women as illegitimate women raised by men who, against insurmountable odds, crossed paths in Nassau and became pirates together. But how much is fact versus fiction?

This first full-length biography about Anne Bonny and Mary Read explores their intriguing backgrounds while examining the social context of women in their lifetime and their legacy in popular culture that exists to the present day. Using A General History of the Pyrates, early modern legal documents relating to women, their recorded public trial in The Tryal of Jack Rackham and Other Pyrates, newspapers and new, uncovered research, this book unravels the mysteries and legends surrounding their lives.

This is a wonderful book that gives you fascinating insight into female pirates. I grew up in an area that historically had strong links with piracy so I was delighted to read this. The writing is enjoyable and not too dense, it's amusing to read, and I would recommend this to others.

I'm trepidatious when I start history related books because some authors have joyless, buzzkill writing styles. I'm relieved to say that this book was pretty decent. To those that have followed my reading habits in the past you'll already know I love things Pirate-related. This book feels like a conversation amongst friends. Or a well-done interview. The information, or lack of information, pertaining to Anne and Mary was casually presented in an easily digestable way. The author attempts to fill in the gaps in an educated manner. When there's discussion about Pirates, there's always the same things being talked about. After awhile, what is enticing about them wears off. What the author manages to do here is bring life back to these people. No longer are they names on pages. They felt tangible. Fresh, real. Exciting.

This was a really impressive read! I can’t believe I have never heard of Anne and Mary before.
Simon does a wonderful job of exploring not only the lives of these women, but the societal norms and beliefs at the time.
I loved the dedication, “Dedicated to all of the forgotten women who forged their own lives on land and sea.”. As a woman currently studying for a history degree, I find studying the lives of women extremely interesting. For years the subject has ignored women and the depths of their character and I am so glad that historians (especially female historians) are pushing to research and write about these forgotten legacies.
Really recommend this book to anybody with an interest in Pirates, lesser-known stories or women who break the societal code!

This book was an excellent overview of everything we know about Anne Bonny and Mary Read. I’ve heard bits and pieces over the years about these two women, but never the complete story, or at least as complete as we can get it. The author is upfront in saying that some of the information, especially about Anne and Mary’s past, is largely theoretical and can’t be confirmed. The text was easy to read and very interesting, though some parts seemed to be repetitive or contradictory to other parts. But overall I enjoyed learning lot only about these two historical figures but also piracy in general. I’m sure I will use it in future writing projects.

This book explores the lives of two of the most famous and, perhaps, infamous, women pirates in history: Anne Bonny and Mary Read. Alas, there is a lot of information that is not known. Though Bonny and Read’s history has been more documented than most because of the court records produced for their trials.

Simon has created scenarios, based on research of the lives of women at this time, of what their stories might have been like, the circumstances of their birth, childhood, etc. to fill the gaps for the information that is not provided in court records and other sources. Simon also explores the bias and messages that male writers expressed in the accounting of these women’s stories. She attempts to put these two women’s lives in context and express the actions they took to take control of their lives in a time when women’s lives were very restricted and constrained.

It is a very interesting book. I only knew the bare facts of these women’s lives and it is astonishing they made such an impact for the short time they were actually pirates, only a few months... It is well written. It provides a part of the picture of pirates that is usually overlooked. Because, there may not have been many women pirates, there were some and other women who lived on ships. Overall, it is definitely worth a read.

This is the first full-length biography of Anne Bonny and Mary Read. Rebecca Simon is a historian and a world-leading expert on pirates, their lives and their roles in colonies and communities.

In ‘Pirate Queens’ she presents details of their backgrounds, their brief careers as pirates and their legacy that has continued for 300 years, including literature and even television series.

She is open about the fact that the biographical information about the women contained in
Captain Charles Johnson’s 1724 ‘A General History of the Pyrates’, was likely fictionalised. She seeks to determine how much was fact and how much was fiction while presenting what is known to be true from primary historical sources. Simon also examines the social context of women in the early eighteenth century.

Having recently read Daniel Defoe’s ‘Moll Flanders’ (1722) I was pleased that Simon noted the similarities between Moll’s fictional biography and the information contained in Johnson’s work on Bonny and Read. There has been claims that Captain Johnson was a pen-name of Defoe, though this is disputed.

Overall, I found ‘Pirate Queens’ fascinating and it proved very readable. It also contains the kind of supplemental material that I expect in a serious work of nonfiction: appendixes of historical documents, including the record of ‘The Tryal of Jack Rackham and Other Pyrates’, notes for each chapter, a bibliography of primary, secondary, and web sources and an index.

This book was a thoroughly interesting read, it combined many of my favourite genres and themes in books; History and female experiences. Add in the fact that the Pirates of the Caribbean movies were released in my early teens (and I was obsessed) and I was instantly sold on this title. From the opening chapters of this book, it gives historical context to the nature of female pirates, from the ancient world, through to our books personalities of focus; Anne and Mary (Though it would have been nice to have a brief nod to another incredibly successful female pirate Ching Shih). From these beginning chapters, the audience is firmly engaged in the subject matter, without assumed prior knowledge and without patronising overtones. It also takes care to acknowledge the primary sources used to inform the biographies in the book, following the conventions of a historical text and the issues of accuracy and reliability evident in these sources. The author is very clear and upfront about how they have had to speculate and hypothesise to fill some of the gaps in the historical narrative in order to present a clear and coherent set of biographies.
The text is written in an engaging format which weaves facts into an engaging account, instead of a dry series of dates and facts. It was formatted in a user friendly manner with chapters of a decent size that were not overly intimidating (as some history and non-fiction books can be)...
Overall, this was an informative and interesting read that I recommend to anyone with an interest in piracy in the 18th Century, or the experiences of women in History. Thanks NetGalley for the opportunity to read and review this book!

I have always been a fan of the stories of Anne Bonny and Mary Read. This account makes in obvious how many of those retellings we're based on fiction. Which is frustrating, because as the account shows, the history we can find is fascinating. Both woman are portrayed through historical records to be intelligent, vibrant, and charismatic.
I greatly enjoyed the read.

I remember first reading about Anne Bonny and Mary Read in A General History of the Pyrates by maybe Daniel Defoe. I'm glad to see someone take the time to delve into the history and backgrounds of these two unique women pirates and I was happy to learn so much more about them.

I have always known the names Anne Bonny and Mary Read, but I really didn't know much beyond the fact that they were female pirates. This book was a great background and history of the available information around them and I liked that the author made clear areas that were speculation and potential biases from the historians and works this one pulls from. Overall an enjoyable read that I learned a lot from!

I really enjoyed reading this book as I have always had a slight fascination with pirates and especially women pirates. I liked the writing style it was easy to read with a good flow and didn't feel to textbooky as some non fiction can... I would definitely read more by the author.

Featured in 'Your essential guide to The Golden Age of Piracy'

Rebecca Simon is a world-leading expert about pirates, their lives and their roles in colonies and communities. She earned her PhD at King’s College London, where she wrote a thesis about public executions of pirates and the struggle of British supremacy in the seventeenth and eighteenth-century Atlantic world. Her work has appeared in the Journal of Maritime History, History Today and BBC History Revealed. Her first book, Why We Love Pirates: The Hunt for Captain Kidd and How He Changed Piracy Forever was published in 2020. Rebecca is a sought-after expert and has been interviewed for television programmes for the BBC, History Channel and Netflix and on podcasts such as History Extra, History Hit and You’re Dead to Me. Rebecca currently writes and teaches in Los Angeles.