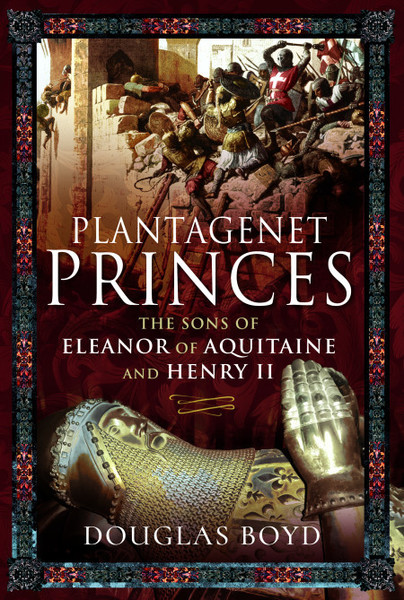 Sons of Eleanor of Aquitaine and Henry II

You'll be £19.99 closer to your next £10.00 credit when you purchase Plantagenet Princes. What's this?
+£4.50 UK Delivery or free UK delivery if order is over £35
(click here for international delivery rates)

Order within the next 7 hours, 49 minutes to get your order processed the next working day!

When Count Henry of Anjou and his formidable wife Eleanor of Aquitaine became king and queen of England, they amassed an empire stretching 1,000 miles from the Pyrenees to the Scottish border, including half of France. Henry’s grandmother Empress (of Germany) Mathilda had taught him that ruling is like venery: show the hawk the reward, but take it away at the last moment, to keep the bird eager to please. To sons and vassals alike, Henry promised everything but gave nothing, keeping the three adult princes hating him and the other siblings all their lives.

Plantagenet Princes traces the lives and infamous webs of mistrust and intrigue among them. What sons they were! Henry (b. 1155), ‘the Young king’ was entitled to succeed his father, yet was a rich playboy who died crippled by debt before his thirtieth birthday, after living the life of a robber baron. Richard (b. 1157), ‘the Lionheart’ was lord of his mother’s duchy of Aquitaine and became, thanks to her, England’s most popular king despite bankrupting the Empire twice in his disastrous 10-year reign. Geoffrey (b. 1158), count of Brittany, was the cleverest, but was trampled to death by horses aged 32 in a pointless mêlée at Paris, leaving his wife Constance to act as regent for their son Arthur in a long power struggle between Philip Augustus, king of France, and the Plantagenets. The runt of the litter, John (b. 1166) was nicknamed Lackland, since no inheritance was initially promised him. He proved the longest-lived by far, dying at the age of fifty after signing Magna Carta, losing the key duchy of Normandy and most of the other continental possessions – also murdering his nephew Arthur, imprisoning Arthur’s sister for life and waging war against his barons, continued by Henry III.

The Plantagenet line continued with Richard of Cornwall, Edward I conquering Wales, gay Edward II, Edward III, Edward the Black Prince and Richard II, who died in prison while his usurper sat on the throne.

I really enjoyed this book, and was surprised as it covered the grandchildren of Henry II and Eleanor of Aquitaine and not just their sons.
I loved the way the book was laid out, with an introduction to the Plantagenet Family, and how they came into existence and power, and then each male was given a chapter dedicated solely to them.

This book explains a major part of medieval royal history in that it looks in-depth at the Plantagenets family and all they encompassed in King Henry, King Richard, King Henry I, II, III, King John and Eleanor of Aquitaine. People usually say that people marry for money, kingdoms and influence and to be honest Eleanor as wife and mother must have been one of society’s prime people. Seeing how much land, the influence she had in having half of France, whose husband would gain that into his possession. With each of the family getting their own chapters this was an excellent book and lays it out well for the reader. A really well written work, which doesn’t get too bogged down in historical detail. Certainly a good book and written about an important part of history.

I would recommend this book to all those interested in this era and some preliminary knowledge of the Plantagenets would help the reader to follow the thread of the various stories. Douglas Boyd clearly has expert knowledge on the Plantagenets and brings their characters to life.

For those that love the Plantagenet line, this is the perfect book for you! Jump into the tangled web of Plantagenet history, and intrigue.

Eleanor of Aquitaine was a formidable woman, but her sons were going to prove just as formidable. While they did not all have happy endings, the line that Henry and Eleanor began was going to be one of intrigue, deceit, piousness and poignant figures that are not easily forgotten.
Dive into the the history of this larger than life family, and get to know the Plantagenet line in a whole new light!

Douglas Boyd has given us a captivating look, albeit a succint one, into the lives of the four male halfwits born of the tempestuous union of Becket's murderer & the infamous French nympho, a truculent foray into the most dysfunctional Anglo-French family of the Middle Ages. Far from being the brightest lights in the harbour and always running a wheel short of a full set, those four royal brothers managed to turn pride, gluttony, lechery, covetouness, wrath, envy and sloth into child play by continually backstabbing each other and squabbling endlessly for asinine reasons while bringing mayhem & wreaking havoc all over Western France during their father's reign, whenever & wherever those four self absorbed idiots felt like it, "bien sûr".....
I definitely love to hate them & I can't stop being fascinated & disgusted at the same time by their egregious and often hard to understand behaviour.
Suffice to say that if reality TV had existed at the end of the 12th century, they would definitely have given the moronic Kardashians a run for their filthy money! A wonderful introduction to the never boring world of the Plantagenets & higly recommended to anyone interested in Medieval history.


At the beginning of this book, the reader is introduced to the world of knights, the protectors of the people upon their noble steeds – or so we have been led to believe, when basically what they actually excelled at was killing others. I love history, especially this time period after having become fascinated with Harold Godwinson, but Plantagenet Princes covers so much more including many things I had not thought of previously, obvious though some of them are, the difference between the horses the knights travelled on and their “destrier “ the horses they rode into battle, but once considered it makes total sense. This is just one of the points Douglas Boyd brings to life and explains in a clear and precise style. In fact, I learned things between these pages which I have often wondered about but never encountered them discussed so honestly and openly.

We live through the exploits, the forming of the family and associates that become the Plantagenets. I appreciate that in the places where previously discovered opinions are quoted, where doubt may still be present in some cases, Douglas Boyd does not assume to “tell” us what the truth is. He states in all honesty that “ we do not know...” and may give a possible scenario, yet still does not insist to know in full detail.
I particularly recommend a part of the book referenced, which was written by Daniel of Beccles that gives advice as to certain propriety of knights e.g., not to attack an enemy while he was squatting to defecate. I must bear that in mind!

The author fully underlines how wily rulers could be and in certain circumstances had to be, how difficult it must have been to relax and sleep soundly in one's bed, constantly having to watch your back, with fathers and sons turning against one another...it seems almost impossible to live a life in such a manner, yet this is what they did. It seems bizarre how important continuing the bloodline was, from father to a son, how necessary a son was but then too many sons became a threat as they more often than not rebelled against their father and their other brothers for greed. This is aided by Boyd's descriptions and detailing of events being so rich and evocative.
Throughout the book, I tried to imagine how the “ ordinary “ person would have existed, trade being badly affected and peasants were incessantly taxed – it must have been hell on earth, being penalised for faults not of their doing.
To conclude, Douglas Boyd has written an informative and enjoyable read, highlighting the Plantagenet line, a rivalry that disrupted families, people and even countries.

I rate Plantagenet Princes 5 out of 5 stars.

Boyd's Plantagenet Princes is a good reference for writers and chronicles this line from its inception to its end. Every page is filled with intrigues, battles, blood lines blended and blended over again. This is a must for scholars of this historical period.

If you wish to learn about the Plantagenets but don’t wish to get bogged down with of the historical ins and outs this is the book for you.
Each Prince has his own chapter so a good book to dip into too. Sometimes history books give you too much history. This hits the right balance between a book for the interested rather than for the academic.