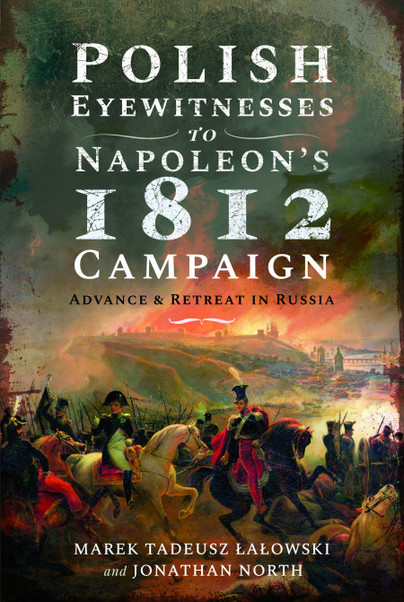 Advance and Retreat in Russia

Click here for help on how to download our eBooks
Add to Basket
Add to Wishlist
You'll be £4.99 closer to your next £10.00 credit when you purchase Polish Eyewitnesses to Napoleon's 1812 Campaign. What's this?
Need a currency converter? Check XE.com for live rates

Napoleon’s invasion of Russia cost the lives of hundreds of thousands and changed the course of history. Europe had never seen an army quite like the one gathering in Poland in 1812 – half a million men in brilliant uniforms, plumed shakoes and shimmering helmets. Six months later, it was the ghost of an army, frozen and miserable, that limped back to their horrified homes.

While the story of this epic military disaster has often been told, it has never been described before from the viewpoint of the tens of thousands of Polish soldiers who took part, and that is why this selection of their vivid eyewitness testimony is of such value.

Most of their accounts – letters, diaries and memoirs – have not been translated into English before, and they come from a variety of authors. Some of them were patriots who were keen to wage war on the Russians in order to regain independence for their country. Others were charmed by the glory of Napoleonic warfare or were professional soldiers who did their duty but had seen too much war to be seduced by it.

They all tell an unrivalled tale – of muskets and drums and burning villages, of Borodino and Moscow and ruthless battles, and of the numbing hunger and biting cold. By the end the great army had been reduced to a pitiless mob and the Polish soldiers, who had set out with such hope, recalled it with horror.

Marek Tadeusz Łałowski is a Polish historian specialising in the Polish contribution to Napoleon’s campaigns. With his co-author Jonathan North he has published Glory and Despair: Polish Accounts of the Sieges of Saragossa, 1808 and 1809 and War of Lost Hope: Polish Accounts of the Napoleonic Expedition to Saint Domingue, 1801 to 1804.