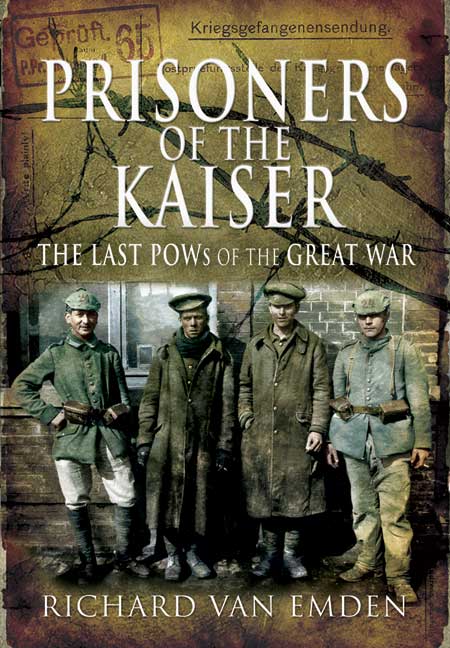 Prisoners of the Kaiser (Paperback)

You'll be £9.99 closer to your next £10.00 credit when you purchase Prisoners of the Kaiser. What's this?
+£4.50 UK Delivery or free UK delivery if order is over £35
(click here for international delivery rates)

Drawing on the memories of the last surviving prisoners of the 1914-1918 war, this book tells the dramatic story of life as a POW in Germany. Stories include the shock of capture on the Western Front, to the grind of daily life in imprisonment in Germany. Veterans recall work in salt mines, punishments, and escape attempts, as well as the torture of starvation and the relief at their eventual release. Vivid stories are told using over 200 photographs and illustrations, almost all never published before.

Richard Van Emden writes in such a logical and compassionate manner and here he achieves his usual high standard. The experience of young men who were captured by the Germans during the great war has been little researched. In this book he takes you through the process of capture, captivity and release with illuminating detail and the individual experience of veterans which were recorded in their old age - all in all a unique insight into a neglected area of military history. The testimony of these ordinary men living through extraordinary events shines through. The subject may be grim, but the reading is easy and enjoyable.

Another brilliant book from this author. 5 Stars!

The author specialises in eye-witness accounts of The Great War. Usually, he writes sparingly, allowing the eye-witnesses to speak, and does a very good job. Here, whilst this shines light into a dusty corner of WWI and is well worth reading, he hasn't done quite his usual job as compared with the likes of Sapper Jack Martin's diaries, or his biography of Henry Patch, The Last Fighting Tommy.

He had two basic choices, either to split the book up by individuals or by "aspects of the POW experience", as he says in his Introduction e.g. the moment of capture, being processed, etc. He chose the latter, not unreasonably, but I'm not entirely convinced it was the better way to organise the book. For whatever reasons (and only he can know), he quotes the veterans somewhat unevenly, in terms of quantity. Bill Easton & Ernie Stevens seem to feature more than others. It's easy to think of reasons why that might be so. However, by the time you're halfway through the book, you may well find yourself struggling to remember who Fred Bloggs was, what was his regiment (or even service arm), where he was captured, when & how, and so on.

Personally, I found it a bit difficult to keep a sense of who most of the men were as men. I got the feeling that that was what van Emden was trying for. Not just eye-witness testimony; he had interviewed these men personally, spent time with them. Presumably, in producing this book as a tribute to them, he wanted to introduce them to you as individuals. Most of them, as with any other eyewitness book, become simply names on the page.

There are also some oddities & minor production issues with this edition. For the latter, the most noticeable is the random hyphenation of words. I can only assume that it was originally published in a different physical size, and the publisher was too lazy (or cheap) to re-check the type-setting. For the former, van Emden gives a detailed description of a photo including Bill Easton, it isn't included in the (more than adequate) photo's that are included. It does seem to be included in another of his books (it matches the description, at least), Meeting The Enemy. A strange & slightly irritating omission.

Therefore, whilst this is a fine tribute to these men, to their experiences, their perseverance, and their longevity, it doesn't, for me, quite hit the mark that the author aimed for. This is a book well worth reading. But if you've not a lot of WWI eye-witness on your shelves, I'd suggest putting this on your wishlist for now, and something else from the the same author in your basket.

Each chapter begins with the author’s concise introduction to the scene and theme then leads on to the Veterans’ first-hand accounts of their time in captivity – enlightening and moving. I know from his other books that Richard van Emden spent decades visiting, interviewing & recording numerous surviving Veterans of the Great War to build up an invaluable archive of their experiences before they were lost to us. He states in the intro that research for this book began in 1999, when he could only find 20 or so remaining PoWWI and he directly recorded the thoughts of 10 of these men. All his contributors had 19th Century birth dates and were thus Centenarians at the time of these interviews - it seems really important that these testimonies have been recorded. The numerous photographs excellently illustrate and compliment the subject matter and together the full range of experiences are covered – from capture and transport through the lines to the camps, the daily grind of life, interaction between inmates and guards, works including salt mining, terrible near-starvation experiences, extraordinary orchestral and theatrical performances permitted in some of the camps (including photos of a prisoner in a full jousting Knight’s costume), tributes to those who did not survive imprisonment, to the eventual release and poignant home comings for the lucky ones (including the irony of one returnee being put to work guarding German Prisoners in East Sussex). Highly recommended book.

This book is an affordable delight. The first thing that strikes the reader is the physical quality of this inexpensive little book. For less than the price of one movie ticket and popcorn, you can get many hours of fascinating, authentic entertainment, years of research and incredible history, all at remarkably affordable price and in an attractive package that will serve you for decades. But the real treat is inside.

Author Richard Van Emden has done something amazing: he has tracked down the last known survivors of World War I German prison camps and recorded their memoirs for posterity. The personal background of each survivor is given in detail. Each surviving POW was interviewed between the ages of 101 and 106 , allowing the reader to reach as far back in history as is humanly possible within one lifespan. That, in itself, is mind boggling.

This is a highly recommended and a wonderful bedtime read. Certainly better than a movie ticket.