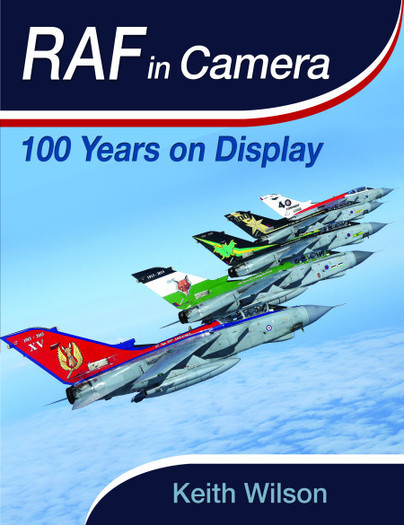 Preorder
Add to Wishlist
You'll be £40.00 closer to your next £10.00 credit when you purchase RAF in Camera: 100 Years on Display. What's this?
+£4.50 UK Delivery or free UK delivery if order is over £35
(click here for international delivery rates)

In July 2018, the nation looked skyward over Buckingham Palace in awe as the Royal Air Force celebrated its first 100 years with a spectacular parade and flypast over London. This event demonstrated a very different perspective of the RAF; well away from its operational commitments.

The expertise and precision of those RAF pilots flying in some of the most famous aircraft in the world has been displayed since the very first days of military aviation. The Inter-War period was dominated by the Hendon Air Pageants; where many aircraft made their public appearance. Post-war, it was the turn of the jet display teams, with the Black Arrows and Firebirds’ laying the foundations for the aerial mastery that is today’s Red Arrows.

The various anniversaries have seen a growth in special artwork being applied to aircraft flown by squadrons celebrating key anniversaries. This is covered in considerable detail within this volume.

On the ground, the RAF is represented at major celebrations and key public events by the Queen’s Colour Squadron, which demonstrates its world-famous continuity drill routine while providing a guard of honour for visiting Heads of States. They are frequently accompanied with the Service’s own bands; which have grown from those created by its squadrons over a century ago.

From the Berlin Airlift in 1948; to flood relief in Kenya; and the international relief effort in the Caribbean following Hurricane Irma in 2017; the RAF has been deployed overseas in response to numerous international crises. But aid operations have also been mounted at home. Under the banner of ‘Military Aid to the Civil Powers’, helicopters and aircraft have airlifted food and supplies to areas cut off by severe weather; Sea King helicopters have rescued villagers stranded by flash flooding in Boscastle; while Chinook helicopters have assisted with the rebuilding of flood defences breached by severe floods across the country.

The golden age of record-breaking also features in this book. From long-range flights to South Africa and Australia; the Schneider Trophy triumph; speed records in the jet age; along with altitude records with pilots in special pressure suits; the RAF has demonstrated its reputation as a truly pioneering Air Arm.

Keith Wilson takes us on a journey through the Royal Air Force’s public persona during their 100 year history. All landmark events are referenced in this thorough, well-researched and image-packed publication.

As with the three previous releases, this new addition to the In Camera series is sure to be regarded as something of a collector’s edition and a real enthusiast’s favourite.