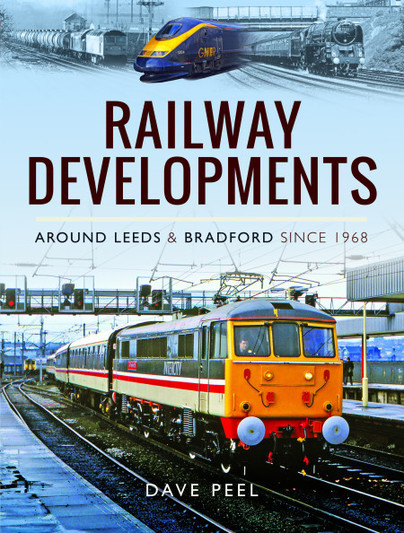 Railway Developments around Leeds and Bradford since 1968 (Hardback)

Add to Basket
Add to Wishlist
You'll be £18.00 closer to your next £10.00 credit when you purchase Railway Developments around Leeds and Bradford since 1968. What's this?
+£4.50 UK Delivery or free UK delivery if order is over £35
(click here for international delivery rates)

1968 was a significant year for the railways; steam traction came to an end, and Parliament passed the 1968 Transport Act. The demise of steam meant more new or refurbished diesel trains, while the Transport Act introduced the concept of locally subsidised services. Both of these impacted heavily on the Leeds/Bradford area, especially when the West Yorkshire Passenger Transport Executive began to financially support local 'Metro' lines from 1976 onwards.

The first major developments were at Bradford, where the two main terminal stations were demolished and replaced by smaller versions; Exchange in 1972 and Forster Square in 1990. In Leeds, the old Central station had closed in 1967, its trains being diverted into City station newly rebuilt to accommodate these. Between 1988-95, when passenger numbers spiralled, four routes from Leeds were electrified: Skipton, llkley, Bradford (Forster Square) and Doncaster.

By the end of the 1990s, Leeds station was at capacity and was rebuilt again between 2000 and 2002, for the second time in thirty-five years! Much of this book is therefore devoted to the transformations of these major stations, as well as Shipley, the busy station that serves Leeds, Bradford, Skipton and Ilkley. Shipley remained un-modemised for many years, and the plethora of changes made here since 1968, following the growth in commuter traffic to Leeds, is also included.

Due largely to the efforts of the WYPTE, several new stations have been added to the Metro system twenty-four currently, but more are likely. With two new franchises starting in April 2016, further developments are planned, including more trains, better frequencies, faster services and more electrification!

The book is profusely illustrated with 300 of the author's colour photos, which cover the entire period 1968-2015


Much has been achieved since 1968, and currently West Yorkshire is dominated by electrification, stations and stock. This quality book co-ordinates change over the past 50 years.

Article: Was demolishing Bradford Exchange the city's worst-ever planning decision? as featured by

As featured on 'Remember When' page

As featured as Product Of The Month

The 300 photographs cover the whole period in question and include some superb shots from the later 1960s right through to 2015; very informative and highly recommended.

THIS is an excellent piece of work covering the changes at the two main West Yorkshire cities, one of which has fared better than the other over the last five decades.

Dave Peel is a married, retired teacher who lives in Dorset. He was born in Bradford and grew up, and was educated, in Shipley. After graduating from Liverpool University, he taught mathematics in Leeds for thirty years. Dave has had a strong intrest in railways and rail travel from an early age. Since the age of eleven he has been an active member of several railway clubs and societies, including Bradford Railway Circle and the Keighley & Worth Valley Railway. Dave has been a photographer of the railway scene for fifty years and has travelled far and wide in pursuit of his interest, both in the UK and world-wide. He also gives illustrated presentations to railway enthusiast groups, as an invited speaker.