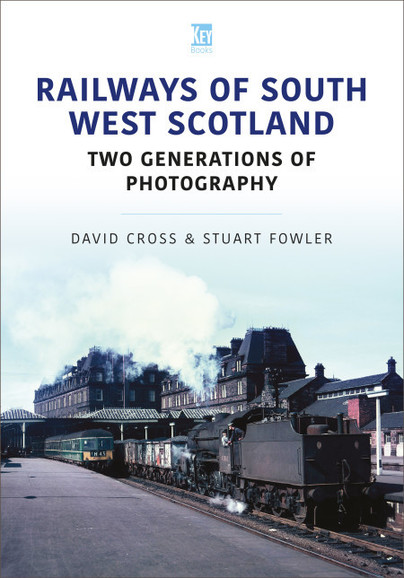 Preorder
Add to Wishlist
You'll be £12.79 closer to your next £10.00 credit when you purchase Railways of South West Scotland. What's this?
+£4.50 UK Delivery or free UK delivery if order is over £40
(click here for international delivery rates)

Illustrated with over 180 photographs, this book presents two generations of railway photography of the southwest of Scotland. The two 20-year periods of 1960–80 and 2001–21 were chosen because the former covers the changeover years from steam to diesel, and the latter covers privatisation, electrification, a range of very colourful trains and a reawakening of the rail network in the southwest after the downward trend during the last years of BR.

The book amply illustrates the lines from Glasgow to Gretna down the Ayrshire and Inverclyde coast to Stranraer, along with the former Glasgow and South Western line through Kilmarnock and Dumfries. In addition, many of the branches and minor routes are also catered for. Exploring the region through the decades, this book is an invaluable source of reference for railway enthusiasts interested in the railways of the southwest of Scotland.

Stuart has been a railway photographer for over 20 years and currently lives on the west coast of Scotland in Ayrshire. His photo library covers predominantly Scotland and northern England from around the year 2000. His photos appear regularly in monthly magazines, and he has written numerous articles on various subjects, all of which have appeared in the railway press. In addition, his photographs have been used for merchandise and on book covers. His previous book for Key Publishing looked at the railways of Scotland in the past 15 years.