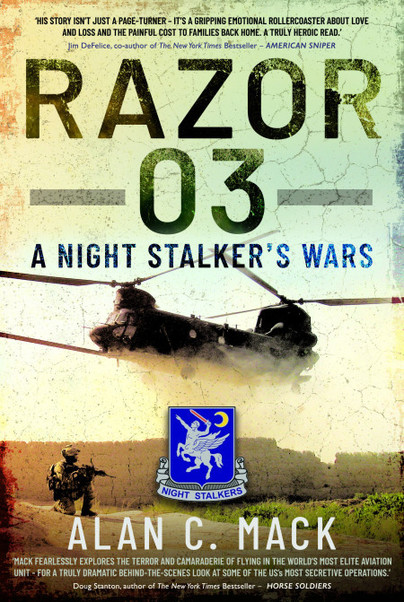 Preorder
Add to Wishlist
You'll be £20.00 closer to your next £10.00 credit when you purchase Razor 03. What's this?
+£4.50 UK Delivery or free UK delivery if order is over £40
(click here for international delivery rates)

The US Army’s Special Operations Aviation Regiment fields the best helicopter pilots in the world. Alan Mack was one of these intrepid “Night Stalkers,” proving his mettle through the rigors of training, endless deployments, and decades of war, during which he hunted Osama bin Laden, rescued American warriors from the jaws of death, was shot up, shot down, and only survived due to his indomitable will and the grace of God.

-Steven Hartov, New York Times Bestselling co-author of IN THE COMPANY OF HEROES and THE NIGHT STALKERS

“Alan Mack has achieved something quite extraordinary: an enthralling combat memoir that provides at the same time a compelling commentary on two decades of war. Perhaps most importantly, it is a searingly honest human story of the personal cost endured by the families of those who serve, and an inspiring tale of resilience. In short -- Mack has produced a triumph of story-telling.”

-Andy Milburn, author of WHEN THE TEMPEST GATHERS

Alan Mack is the real deal, part of an elite band of ultimate aviators. Throughout all the setbacks - getting shot down, losing comrades, and tragedy on the home front - he endures. He is the living embodiment of his unit's motto: "Night Stalkers Don't Quit!"

A been-there, done-that pilot in the world’s most elite helicopter unit, Alan Mack delivers a gritty, inside look at life as a Night Stalker – from intense combat missions overseas to the tragic costs that lifestyle can impose on a family.

“Al Mack reminds us that the blank check our service members sign to our country is drawn against their families as well. The challenges can be heartbreaking. His candid memoir speaks of courage and tragedy, both on the battlefield and at home.”

Taya Kyle, New York Times Bestselling author of AMERICAN WIFE
Razor 03, A Night Stalker’s Wars, is an eye-opening description of what goes on behind the scenes of special operations from a pilot’s perspective. Al Mack’s edge-of-the-seat stories provide a compelling rendition of what it’s like to ride to Hell and back in an MH-47 Chinook. An incredible story hardly believable had I not witnessed it first hand.”


Razor 03 reads like a fast-paced action novel. Alan Mack gives us the deepest dive I’ve ever read about the fantastic life of a Night Stalker. It is as much a history lesson as it is a personal confession about the extremes of life in our nation’s most esteemed aviation unit, TF 160. Razor 03 is the reminder we all need to know: our nation is safe because of the sacrifices and commitment of these brave men and women.

CW5 Alan C. Mack retired from the Army as a Master Aviator. He served over 35 years in the Army, first as an aircraft mechanic then as a pilot.

He flew CH-47s in support of Operations Desert Shield and Storm. Additionally, he spent 17 years flying MH-47 Chinooks with the 160th SOAR. As a Night Stalker Flight Lead, he participated in Operations Desert Thunder, Desert Fox, Enduring, and Iraqi Freedom.

His awards include the Legion of Merit, 2 Distinguished Flying Crosses, 10 Air medals – 1 with 'V,' and a Combat Action Badge.

Alan finished his career as Commander of the West Point Flight Detachment. Now he and his wife Patti live happily in New York's Hudson Valley.