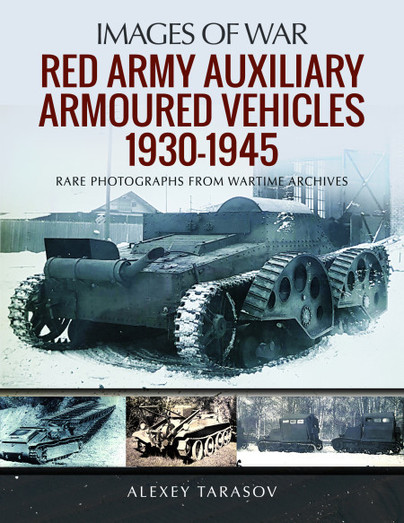 Click here for help on how to download our eBooks
Add to Basket
Add to Wishlist
You'll be £4.99 closer to your next £10.00 credit when you purchase Red Army Auxiliary Armoured Vehicles, 1930–1945. What's this?
Need a currency converter? Check XE.com for live rates

During the 1930s in the Soviet Union a remarkable range of auxiliary armoured vehicles were produced for the Red Army which have rarely had the attention they deserve, and Alexey Tarasov’s photographic history is the ideal guide to them. These innovative designs demonstrate the diversity and innovation of the Soviet arms industry.

Among them were armoured flails, ambulances, bridge-layers, flame-throwers and amphibious cars which prefigure similar designs made by western engineers during the Second World War. As this selection of rare photographs shows, Soviet designers were in many ways ahead of their time and it was short-sighted internal policy and the shortcomings of Soviet industry which led to the cancellation or postponement of many of these promising projects. As a result, when faced with Operation Barbarossa in 1941 the Red Army lacked the auxiliary armour that would have helped to stem the German advance.

Alexey Tarasov’s in-depth research and the rare photographs he has assembled give a fascinating insight into a little-known aspect of the history of Soviet armoured vehicles.

In war histories support services are sometimes disparaged, but without them armies would be unfed and movement grind to a halt; yet the Red Army entered WW2 lacking auxiliary vehicles and efficient support infrastructure. M.N. Tukhachevsky (future Red Army Marshall) and others, had advocated mobile warfare aided by a range of auxiliary vehicles, furthering Deep Operations strategy striking into enemy rear areas. Discredited after his death in Stalin’s purges, poorly unified conflicting theories predominated; deficiencies in command and control of tank formations explained by overburdening superfluous auxiliary units. The Barbarossa factory evacuations curtailed auxiliary vehicle manufacture, priority switching to gun tank production. Using archival documents the author cites disruptions to tank operations from lack of purpose-designed support vehicles and deficient organizational infrastructure: South-Western Front 1942, 3rd Guards Tank Army 1943, and 6th Tank Army Manchuria 1945. Shortcomings feature throughout these campaigns: insufficient and elderly trucks breaking down or bogged unable to support an advance, limited repair and recovery services, lack of spares forcing cannibalization of wrecks, lack of specialist engineering vehicles to overcome obstacles. Lend-Lease tanks and vehicles helped, but tanks having to carry infantry, spares, and haul guns wore out quickly. Best of all is the half book of half-page state archive photos of rarely seen vehicles, many as prototypes, some just drawings or low production lots, some bizarre like the TPP jumping tank, and others such as the BA-22 armoured ambulance, flamethrowers, recovery and haulage tractors, T-20 Komsomolets teletanks, bridgelayers, and mine-clearers. A much neglected subject, recommended. Thanks to Pen and Sword for the sample.

"A lot of the text examines the impact on combat operations due to the lack of support vehicles -- logistics, artillery movers, repair, command, and so on."

This title looking at the Auxiliary Armoured vehicle of the Red Army, provides the viewer with both written data and photographic images of platforms rarely seen. I feel that a number of the oddities depicted here would appeal to the fans of the unusual, and the quality of the images will enable those with the required skill set to produce some particularly visually appealing models.

This book fills a gap in the history of Soviet AFVs. It is a valuable reference source and model makers will be inspired by many of the photographs here. For anyone interested in the history and development of Soviet armour this book is essential reading. Highly recommended.

"This book is quite simply superb. It is a terrific addition to the literature on interwar experimentation with mechanized units, the Red Army and especially on engineering vehicles."

I have seen and read a lot on Soviet armoured vehicles and equipment in WW2 over the years, but this has some I have never seen before. Interesting to read plus the archive photos include some vehicles that would be great to try and recreate and be eye-catching additions to any collection. I therefore rate this as a fascinating references and would recommend it to anyone interested in Soviet vehicles of WW2.

If the tactics of armoured warfare or that of the Soviet Union is of interest, then this book should be added to your personal library. It covers an aspect of armoured warfare which can be neglected but it is an essential component to successful armoured warfare. Many of the vehicles discussed have their modern-day counterparts so it is still relevant to the military doctrine of the 2020s. The author has done a splendid job in researching the background to these vehicles and sourcing the period imagery.

In 13 chapters the author leads us through the development of Soviet tank doctrine from their initial concepts of armoured warfare based upon their experiences in the Spanish Civil War through to World War II. He shares with us the conflict of those who supported a universal tank concept, one vehicle doing the job of all, to a 3 and also a 6-type vehicle concept, influencing the whole of the armoured division doctrine. Some argued that the formations should be fighting units alone and support vehicles be separated. The political influences were such that the Red Army was plagued by indecision and any development of support vehicles was hindered. There was thought that the reasoning behind such thinking was, like the British, tanks were for Infantry support and the Infantry was supreme. There are 16 tables reflecting armament, tank classification, vehicle and unit strength, recovery and repair statistics. There are 134 black and white photos of wheeled and tracked vehicles, AFVs, tractors, bridge layers and SP guns; 82 from 1930-1940 and 52 taken from between 1941 and 1945. This is an enlightening addition to anyone interested in Soviet armour.

Alexey Tarasov has made a special study of the armoured forces of Germany, Great Britain, France, the USA and the Soviet Union and he has compiled an extensive documentary and photographic archive covering the history of the tanks and other fighting vehicles they have produced. He is an editor of Tank Encyclopedia Magazine and writes for shephardmedia.com, Iz.ru (Izvestia) and Oborona Rossii.