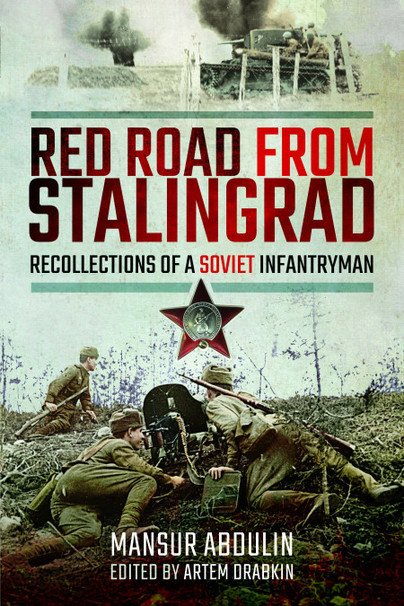 Recollections of a Soviet Infantryman

Add to Basket
You'll be £10.40 closer to your next £10.00 credit when you purchase Red Road From Stalingrad. What's this?
+£4 UK Delivery or free UK delivery if order is over £30
(click here for international delivery rates)

Mansur Abdulin fought in the front ranks of the Soviet infantry against the German invaders at Stalingrad, Kursk and on the banks of the Dnieper. This is his extraordinary story. His vivid inside view of a ruthless war on the Eastern Front gives a rare insight into the reality of the fighting and into the tactics and mentality of the Red Army's soldiers across the Steppes to the banks of the Dnieper river where he was seriously wounded and invalided out. He was decorated orded of Red Star for his feat on the right bank of the river.

In his own words, and with a remarkable clarity of recall, he describes what combat was like on the ground, face to face with a skilled, deadly and increasingly desperate enemy. The terrifying moments of action, the discomfort of existence at the front, the humorous moments, the absurdities and cruelties of army organization, and the sheer physical and psychological harshness of the campaign – all these aspects of a Soviet soldier's experience during the Great Patriotic War are brought dramatically to life in Mansur Abdulin's memoirs.

The grand strategy of the campaigns across the Eastern Front is less important here than the sequence of brutal and bloody engagements that were the first-hand experience of the common soldier. It is this closeup view of combat that makes Mansur Abdulin's reminiscences of such value.

Grand strategy, brilliant tactics often mean less than the battles and the men who fought them, making this memoir of a Soviet infantryman all the more valuable and interesting. The author volunteered for the Red Army in 1942. – Very Highly Recommended.

Written by a member of the Red army infantry, the reader gets a boots on the group d experience of the battle and afterwards.
The author pulls no punches and this adds to the vivid detail and takes the reader into the heart of the red army.
It is a recommended book for anyone who wants to know what this battle was like and how it affected those who fought in it.

Mansur Abdulin volunteered to fight for the Red Army in 1942. After completing his course at the Tashkent infantry school, he fought on the Stalingrad front, during the encirclement of the German 6th Army, participated in the bitter, decisive battle at Kursk and harried the Germans as they retreated across the Steppes to the banks of the Dnieper river where he was seriously wounded.