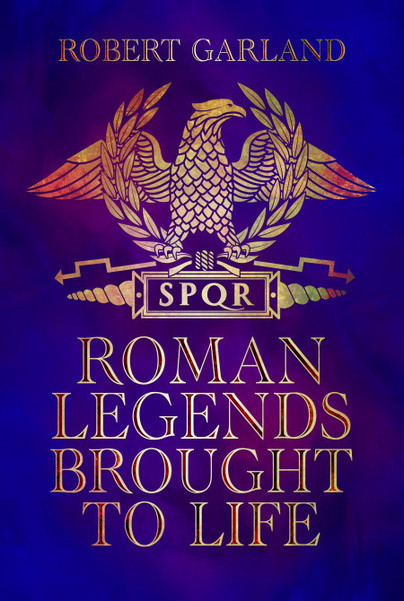 Preorder
Add to Wishlist
You'll be £16.00 closer to your next £10.00 credit when you purchase Roman Legends Brought to Life. What's this?
+£4.50 UK Delivery or free UK delivery if order is over £35
(click here for international delivery rates)

The legends of early Rome are among the most memorable of any in the world. They are also highly instructive. They taught generations of Romans about duty and obedience. Duty and obedience might not seem to amount to much these days, but it was precisely these virtues that made Rome great. The legends are not, however, merely self-congratulatory and they are rarely simple exercises in nationalist propaganda. On the contrary, many reveal their ancestors’ dark side, which they expose unflinchingly.

As in the case of Greek mythology, there is no authorised version of any Roman legend. The legends survived because they reminded the Romans who they were, what modest beginnings they came from, how on many occasions their city nearly imploded, and what type of men and women shaped their story.

Defeat, loss, failure. That’s where this story – the story of the boldest, most enduring, and most successful political experiment in human history – begins. It’s the story of how a band of refugees escaped from the ruins of a burning city and came to establish themselves hundreds of miles to the west in the land of Hesperia, the Western Land, the land where the sun declines, aka Italia. It’s the story of a people who by intermingling, compromise and sheer doggedness came to dominate first their region, then the whole of peninsula Italy, and finally the entire Mediterranean and beyond.

Robert Garland was the Roy D. and Margaret B. Wooster Professor of the Classics at Colgate University, where he taught for 30 years. He attended drama school before completing his Ph.D. at University College London. He has recorded five courses for The Great Courses and written two videos for TED Animation. Robert has published 13 academic books on Greek and Roman history, and has recently finished a comic historical novel. He considers his most important contribution to the discipline to have been to identify categories of people who have been generally overlooked or marginalised in conventional accounts of ancient history, such as the disabled and refugees. He is the author of How To Survive in Ancient Greece and Greek Mythology: Gods and Heroes Brought to Life, also published by Pen & Sword. He is a practising artist.