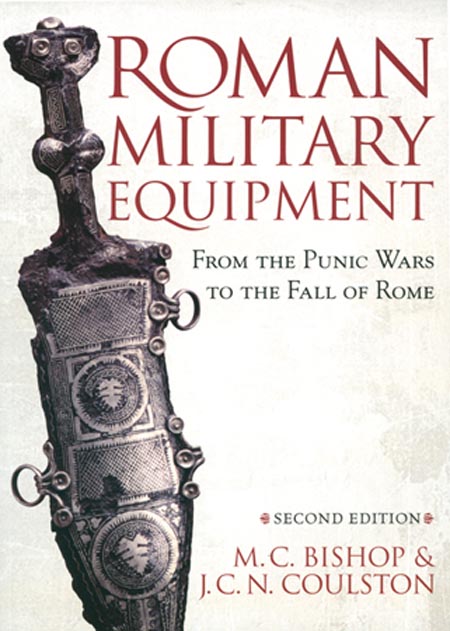 Roman Military Equipment from the Punic Wars to the Fall of Rome, second edition (Paperback)

Add to Basket
Add to Wishlist
You'll be £19.95 closer to your next £10.00 credit when you purchase Roman Military Equipment from the Punic Wars to the Fall of Rome, second edition. What's this?
+£4.50 UK Delivery or free UK delivery if order is over £35
(click here for international delivery rates)

Rome's rise to empire is often said to have owed much to the efficiency and military skill of her armies and their technological superiority over barbarian enemies. But just how 'advanced' was Roman military equipment? What were its origins and how did it evolve? The authors of this book have gathered a wealth of evidence from all over the Roman Empire - excavated examples as well as pictorial and documentary sources - to present a picture of what range of equipment would be available at any given time, what it would look like and how it would function. They examine how certain pieces were adopted from Rome's enemies and adapted to particular conditions of warfare prevailing in different parts of the Empire. They also investigate in detail the technology of military equipment and the means by which it was produced, and discuss wider questions such as the status of the soldier in Roman society. Both the specially prepared illustrations and the text have been completely revised for the second edition of this detailed and authoritative handbook, bringing it up to date with the very latest research. It illustrates each element in the equipment of the Roman soldier, from his helmet to his boots, his insignia, his tools and his weapons. This book will appeal to archaeologists, ancient and military historians as well as the generally informed and inquisitive reader.

This book provides so many details about Roman military equipment that it completely blew my mind. Rather than treating this as an ordinary military history book, I perceive this book as more of a profound archaeological/historical work. Supported by hundreds of references and primary sources, this book is a true gem that any Roman military aficionado should keep.