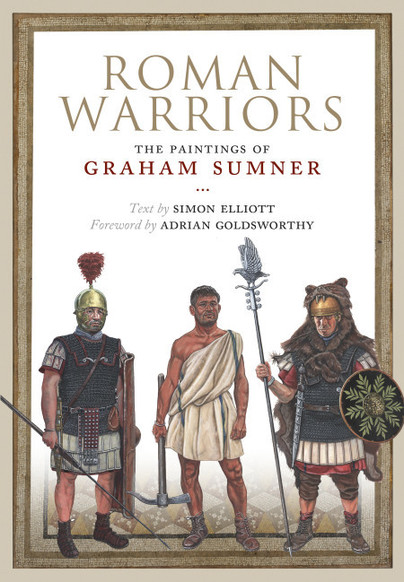 The Paintings of Graham Sumner

Preorder
Add to Wishlist
You'll be £28.00 closer to your next £10.00 credit when you purchase Roman Warriors. What's this?
+£4.50 UK Delivery or free UK delivery if order is over £35
(click here for international delivery rates)

“This book represents the fruit of many years of study by a well respected author in the field. It is well written so as to be very readable for the non-academic whilst presenting a huge, and surely definitive, array of evidence” – Roman Army Talk on Roman Military Dress

“An excellent and informative book from a very knowledgeable author” – Amazon.co.uk on Roman Military Dress

Gathering together stunning artwork from Graham Sumner’s impressive, expansive portfolio, featuring never-before-seen illustrations from the artist and reminding us of his exceptional ability to bring Ancient Rome to life through painting, this colourful, comprehensive anthology is a must-have for any enthusiast of the period, and of military history in general.

This combination of Sumner’s illustrations and Elliott’s writing leaves no stone unturned as they divulge information about this fascinating period of military history in mesmerising, intricate detail. Readers will swiftly become fully immersed in this ancient world, and will leave it with a wealth of knowledge about and a profound understanding of the warriors of Ancient Rome, and a great appreciation for Sumner and Elliott’s expertise in the area.