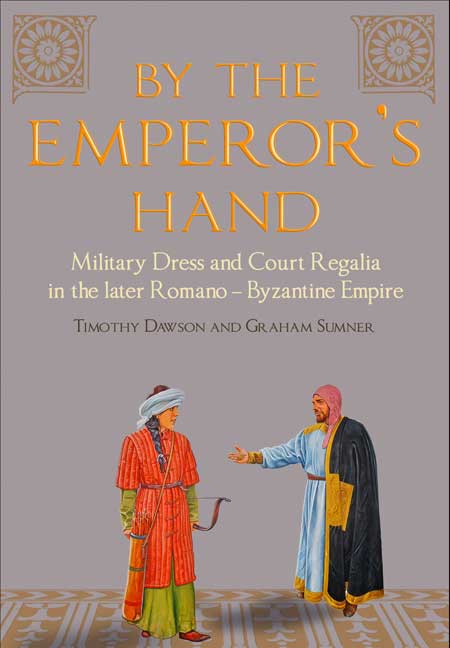 By the Emperor's Hand (Hardback)

Military Dress and Court Regalia in the Later Romano-Byzantine Empire

Add to Basket
Add to Wishlist
You'll be £30.00 closer to your next £10.00 credit when you purchase By the Emperor's Hand. What's this?
+£4.50 UK Delivery or free UK delivery if order is over £40
(click here for international delivery rates)

By the sixth century of the common era the Roman Empire already had many hundreds of years of accumulated ceremonial embedded in its government, and practical science embodied in its army.

The transition from Republic to Imperium and the more hierarchical structure that entailed, and the absorption of Christianity into state processes, had pushed the development of court ceremonial apace, and particularly driven its embodiment and display in ever more opulent regalia. The regalia embraced not only garments of distinctive form and decoration, but also both dress and non-dress accessories. It was crucial in displaying rank and function on an everyday basis, yet was also varied considerably for special occasions. Military dress largely reflected forms current amongst ordinary men, but with an emphasis on functionality, eschewing the excesses of fashion.

Detailed literary and artistic sources, archaeology and insights derived from reconstruction and practical experience has gone into creating an incredibly lavish picture of the clothing of the longest-enduring political entity in history.

A very interesting subject that covers an existing vacuum on the clothing of this time and a first visual documentation.

TIMOTHY DAWSON has published widely on aspects of material culture and social history, particularly clothing and military matters. He has a BA(Hons) in Classical Studies, and a doctorate at the University of New England via a dissertation on court dress and regalia in Constantinople.