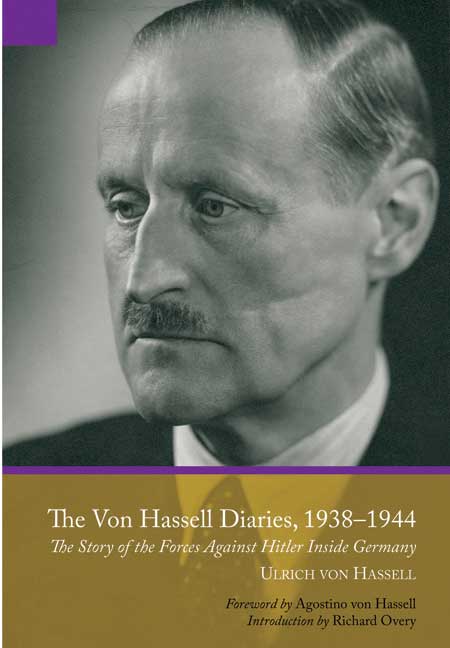 The Story of the Forces Against Hitler Inside Germany

Click here for help on how to download our eBooks
Add to Basket
Add to Wishlist
You'll be £4.99 closer to your next £10.00 credit when you purchase The Ulrich von Hassell Diaries, 1938-1944. What's this?
Need a currency converter? Check XE.com for live rates

Without doubt, Ulrich von Hassell was one of the most important members of the German Resistance: this is the first complete edition of his wartime memoir with new material from his grandson, Agostino von Hassell.Von Hassell began working for the German Foreign Office in 1909, then aged 28. Two years later, he married Ilse von Tirpitz, the daughter of Grand Admiral Alfred von Tirpitz.After being wounded in the First Battle of the Marne, he worked as the Admiral s advisor and private secretary.Hassell joined the Nazi Party in 1933, but strongly opposed the Anti-Comintern Pact (1937) and was sacked by Ribbentrop from his posting in Rome. After Poland was attacked, he led a delegation to allay European fears of further German aggression. He participated in plans to overthrow Hitler, acting as a liaison between Carl Goerdeler, Ludwig Beck and the Kreisau Circle and attempted to recruit Halder, Fromm and Rommel to the idea of a military coup then a negotiated peace. He also used his position on the Central European Economic Congress committee to discuss with Allied officials what could follow a coup d &eacute;tat in Germany.He played the role of a principal civilian advisor in the July Plot of 1944 and was executed after a two-day trial.

Loathed by Hitler but regarding this as a compliment, Ulrich von Hassell was the leading diplomat of the German Resistance. He was, as Richard Overy remarks in his new and perceptive Introduction, "the Foreign Minister that Germany never had." His diaries constitute an important primary source on the movement during WWII. They suggest a man of steadfast moral principles, implacable in his opposition to the Nazi Leader ("this megalomaniac and irresponsible corporal") and one with a lofty, patrician disdain for the regime and all it stood for: "Vain are all efforts to pour iron into the bloodstream of the people [with this] half-insane, half-criminal policy" (187).

If, with hindsight, it seems clear to us that any attempt at putting an end to the tyranny would have to involve the removal of Hitler, it may seem surprising to find that doubts about this existed at the time: if just one keystone were removed, wouldn't the whole structure collapse? We have to remember that these were men acting under extreme emotional pressure amid the highly charged, emotional atmosphere of the Third Reich. Differences developed between them and were perhaps inevitable, given their respective backgrounds and the complexity of the issues they had to face. Wasn't the Allied call for Unconditional Surrender only strengthening opposition to capitulation? And if the majority of the German people still believed in Hitler, what then? The author is interesting on the politics and personalities of those involved, including von Weizsaecker, Goerdeler and Hjalmar Schacht, to name but three, and a comparison between his assessment of this last with Schacht's own very different account of himself and his actions might well prove instructive.

Von Hassell's text is also revealing as to what he knew of the range and extent of Nazi atrocities, and how he got to hear about them, including Mass Murder in the East and the Nazi 'euthanasia' programme (see pp. 137-138; p. 197).

These pages represent a terrible indictment of the paranoid world-view of Nazism, symbolised in a terrifying and surreal manner by the camera concealed within the centre of the swastika flag adorning the courtroom wall, which filmed the brave von Hassell as he went on trial for his life.

This book provides a fascinating and personal viewpoint of events from before and during the second world war.

His Diaries are published for the very first time as an english edition. The journals which were buried in a garden and only recovered after the World War two, form a fascinating account of resistance to the Nazi Party from inside Germany by a patriotic German who gave up his life for his believes.

This remarkable and very readable first- hand account of Hitler’s Germany 1938-44. It chronicles in considerable detail the life and times of a German nation, initially confident and optimistic after overcoming many of its post-1918 tribulations, but subsequently overshadowed by the advance of Nazism as Hitler’s ideological obsessions and strategic ambitions increasingly threaten Germany’s very existence.

Although von Hassell focuses upon the activities of the wider German resistance movement and his own opposition to Hitler, the diaries provide compelling images of a once-great nation seeking to restore its erstwhile world status but fatally trapped by its choice of the wrong national leader and political ideology.

An English-language edition of his diaries was first published in 1947, but this new edition benefits from an excellent introduction by Richard Overy and a foreword by von Hassell’s grandson, Agostino von Hassell. Family archive illustrations, comprehensive notes, appendices and chronologies amplify the text and provide a clear historical context, balancing and enhancing the reader’s understanding and appreciation of this important book.

Ulrich von Hassell was born on 12 November 1881 and was a Geman diplomat during World War II. He was executed on 8 September 1944.