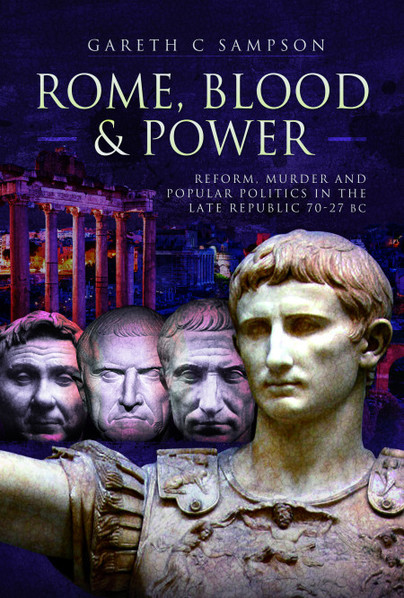 Reform, Murder and Popular Politics in the Late Republic 70-27 BC

Add to Basket
Add to Wishlist
You'll be £12.50 closer to your next £10.00 credit when you purchase Rome, Blood and Power. What's this?
+£4.50 UK Delivery or free UK delivery if order is over £40
(click here for international delivery rates)

Following the First Civil War the Roman Republic was able to rebuild itself and restore stability. Yet the problems which had plagued the previous seventy years of the Republic, of political reform being met with violence and bloodshed, had not been resolved and once again resumed. Men such as Catiline and Clodius took up the mantle of reform which saw Rome paralysed with domestic conflict and ultimately bloodshed and murder. In the search for stability, the Roman system produced a series of military dynasts; men such as Pompey, Crassus and Caesar, who strove to bring stability to Rome. Ultimately this led to the Republic’s collapse into a second and third civil war and the end of the old Republican system. In its place was the Principate, a new Republic founded on the promise of peace and stability at home and end to the decades of bloodshed. Gareth Sampson analyses the various reforming politicians, their policies and opponents and the violence and bloodshed that resulted. He charts the Republic’s collapse into further civil wars and the new system that rose from the ashes.

This is an interesting approach to the period, and one that I found to be of great value. The detailed approach to the day-to-day politics of Rome brings to the fore many key developments that are often skipped over in books that include more military history, but that actually played a major role in the continued instability of the Republic. The detailed look at the workings of the Roman Republic also helps explain why so many attempts to reform it failed, and why Augustus’s eventual reforms were so cunning, and so succesful.

I can easily recommended this book, and certainly both, for anyone who has any interest in the history of the period.

One of the comments on the dustjacket states that the book is both scholarly and entertaining, which is a rare feat. I agree entirely with this opinion. Another excellent publication from Pen and Sword!

The study of Ancient Rome once required scholarly works to be stodgy and hard work to wade through. Fortunately that model has gone and this new book provides scholarly information in an engaging and exciting manner. The history of Rome was bloody and that so many good things came out of it were almost accidental. Certainly with Rome nothing was dull – Highly Recommended.