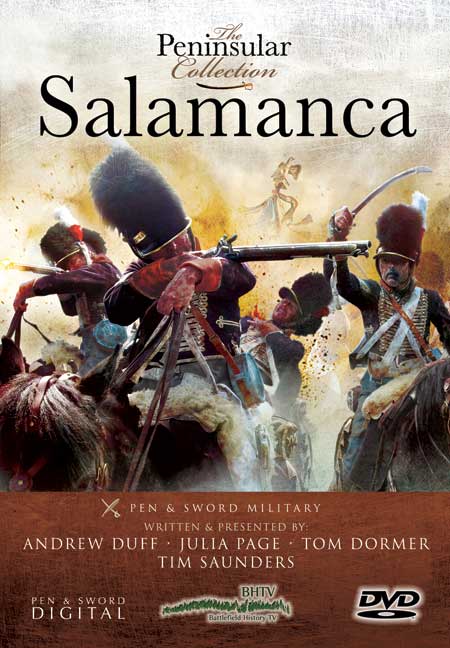 Add to Basket
Add to Wishlist
You'll be £12.99 closer to your next £10.00 credit when you purchase Salamanca. What's this?
+£4.50 UK Delivery or free UK delivery if order is over £35
(click here for international delivery rates)

Since his return to the Iberian Peninsula in 1809, General Arthur Wellesley (later The Duke of Wellington) had with his small army been a constant thorn in the side of a series of Napoleon's Marshals in Spain, studiously avoiding battles that he could not win and falling back before superior forces to the Lines of Torres Vedras in 1810. By 1812 he had forged a successful Anglo Portuguese Army with a string of victories to their credit that included Talavera, Bussaco and Fuentes de Onoro.

Now Wellesley was ready to take the battle to the French and with the capture of the border fortresses of Cuidad Rodrigo and Badajoz in the winter and early spring of 1812 he had two routes open for him into the heart of Spain. Supported by Hill's Corps guarding the Tagus crossings and a policy of distraction, which kept the other French Army's in Spain fixed in their areas, the target was Marshall Marmont's Army of Portugal. This army was concentrated around the city of Salamanca but fell back as the Allies approached. In a series of manoeuvres, almost like a throwback to the wars of the Marlborough Wellesley waited for Marmont to make a mistake. Finally that moment came when Marmont, convinced that Wellesley “a defensive general”, who was falling back to Portugal and in his eagerness to cut him off, his line of march became over extended.

The bulk of the Anglo Portuguese Army concealed from Marmont behind a ridge attacked in echelon and defeated four French Divisions in a desperately hard fought battle during which the 44th captured a French Eagle. But the French were far from totally beaten and they put up a creditable rearguard action but were driven from the last ridge by attacks supported by the skillful employment of artillery. Sadly the victory was not total as a Spanish General who had been tasked to hold a vital bridge had withdrawn his men and was too embarrassed to tell Wellesley.

Wellesley's whole campaign, culminating in the battle, which destroyed the main French Field Army in Spain, was a master class in generalship, which according to Maximilien Foy put him in the class of Frederick the Great or Marlborough. The Victory of Salamanca ensured that the French would have to evacuate southern Spain and eventually leave Spain completely.

The battle of Salamanca in 1812 is one of Wellington’s most artful victories. In a series of manoeuvres against Marmont’s Army of Portugal Wellington waited for his opponent to make a mistake. When he saw the error he exclaimed ‘That will do, by God’ and acted decisively. This DVD captures the drama of that event using maps, pictures, re-enactors and expert explanations. There is more talk indoors than in other DVDs from this publisher but this is redeemed by the excellent location filming and the explanations given on site.
This DVD is part of the Peninsular Collection of films and its general impact on the war as a whole, as well as the precursors which allowed it to happen, are discussed.
Well worth watching.

The strategies and complexities of the battle are brought vividly to life in this DVD. On the spot filming highlights how Wellesley used the terrain to its best advantage. A very enjoyable and interesting film, which will appeal to anyone with a general interest in this period of history as well as military enthusiasts. It is a good solid introduction to the battle.

The first thing to note is that the DVD is presented by people who are both passionate and knowledgeable about the subject matter; in some ways it is reminiscent of the better Open University programmes.
On-screen narrative is presented from cosy front rooms to the battlefield as it is today, and this makes for entertaining and interesting viewing. The shots of the battlefield itself will provide great inspiration for diorama boulders and wargamers alike. There is also considerable use of period illustrations, together with footage of re-enactors, all of which add to the atmosphere and value to modellers.
I was attracted by the enthusiasm of the presenters. While I am familiar with Wellesley’s campaigns, I learned a great deal from this DVD. The location shots give a sense of the scale and type of terrain the battle was fought over, impossible to fully describe in a book. This certainly has awakened a desire to visit the sites. At no point does the presentation become over technical or condensing, but it foes prove that history is interesting.
If you only have a passing interest in the Napoleonic Wars, you will hopefully get something from this DVD.

After an outstanding series of DVDs covering the Waterloo Campaign, the presentation team have kicked off a new series in high style, covering the earlier Peninsular War. There is a great advantage in using former soldiers and historians to present military history than to use television presenters. This avoids the breathless presentation and fake gravitas that has made so many made for TV presentations poor history, where the presenter often stresses the wrong factors in an attempt to hold the audience, indicating a lack of real knowledge. In this DVD the presentations are authoritative and absorbing.
This DVD is certainly a must for all military history enthusiasts, but it is also first rate entertainment that will appeal to a wider audience. It follows the presentation format of the best selling Waterloo series and anyone who watches this DVD will eagerly await the other DVDs in the series. The production quality and colour is first rate, the account moves at a good pace and the detail and research are excellent. - Great viewing.