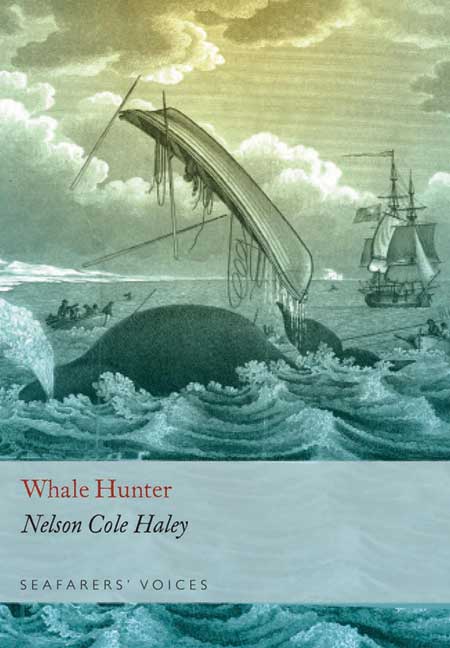 Click here for help on how to download our eBooks
Add to Basket
Add to Wishlist
You'll be £4.99 closer to your next £10.00 credit when you purchase Seafarers' Voices 6: Whale Hunter. What's this?
Need a currency converter? Check XE.com for live rates

This is the narrative of a harpooner in the whale-ship Charles W Morgan, whose four-year voyage in 1849-1853 took him from New Bedford, Massachusetts, to the South Pacific and on around the world. Before the days of the whale-gun and its explosive warhead, whaling was a dangerous and far from one-sided pursuit – indeed, one of Haley's earliest experiences was the destruction of his boat by a whale attack, and even when the harpoon hit the target, the whaleboat would be towed at speed until the wounded whale was exhausted, a terrifying experience that was known to whalemen as a 'Nantucket sleigh ride'.
Haley's narrative covers all the excitements and dangers of the business – like trying to work on a slippery whale carcass, while the surrounding waters seethed with sharks – but also encompasses the long hours of boredom, when sailors entertained each other with tall tales. Many are recounted, and, surprisingly, some of the least likely can be corroborated. In fact, Haley's anecdotes of the South Seas in transition form one of the great appeals of the book. On the one hand there were still hostile islands with murderous inhabitants, while others had been so strongly influenced by Christian missionaries that pleasures of the flesh were now entirely off-limits.
Whaling was, in effect, the first oil industry, a high-risk business where huge fortunes were to be made. Haley's is the authentic voice of those that chose its dangers.

An adventuresome tale... an entertaining and informative read.

Seaforth Publishing has recently added another very fine, attractive and readable title to it's maritime series "Seafarers Voices." Nelson Cole Haley's 'Whale Hunter' is the sixth in the series of titles intended to "unveil the extraordinary and unfamiliar world of our seafaring ancestors" with abridged texts describing seafaring between 1700 and 1900.
Haley's text itself remains an exciting first-hand description of one of the world's great maritime enterprises.

For those interested in the specific nature of American whaling, from the logistics of being a boat steerer to the collection of the oil, this account is a perfect first-hand tale of how this was accomplished. Also, if interested in the dynamics of shipboard life in the nineteenth century, Haley's account provides tales of laughter, danger, and maritime culture and activity.

In 1849, at the height of the Golden Age of American whaling, 17 year old Nelson Cole Haley joined the crew of a 33 metre wooden whaler. Whale Hunter is Haley's account of the ensuing four year voyage. The result is not only a stirring tale of adventure on the high seas but a thoughtful take on the moral complexities involved in opening up the Pacific. There's everything you might hope for in a 19th century sailor's yarn.

The importance of Haley’s account is the door it opens into the heyday of American whaling ships, when seamen sailed as far as the South Pacific to hunt these mammals to bring back their baleen (whale bone) and sperm and whale oil, which were in great demand during the Industrial Age. The voyage recounted here began in 1849 and lasted four years.
Haley’s account brings to life a whaler’s life a whaler’s life and the dangers and hardships such men faced.
This wonderful and engrossing narration opens the door to a past way of life, one in which the reader can literally step through afterwards with a visit aboard Haley’s ship and a tour through a 19th-century whaling community in Connecticut.

This is one of those special interest books that deserve and demands a very much wider audience...a book to rush out and buy whatever your primary reading interests

NELSON COLE HALEY was only 17 when the ship set sail, but he was already a hardened seaman and experienced enough to be rated as a boat-steerer and ultimately a harpooner, the most responsible position in any whaler. He wrote the account about the time of his marriage in 1864, when he had given up seafaring.